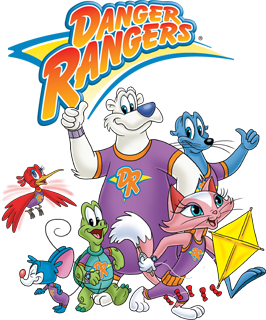 "It's up to you, what'll you do, who are ya' gonna be like?" note Characters from top going clockwise: Burble, Sully, Kitty, Burt, Squeeky, Gabriella. Not pictured: Fallbot.
Advertisement:

Danger Rangers is an animated Edutainment Show that aired on PBS. It features six animal heroes (and one Robot Buddy) who teach children about safety through example.

The series was originally released from 2005 to 2006. Following a change in ownership, it began re-airing on CBS on September 17, 2011, as part of the Cookie Jar TV block, and then on This TV after it was removed from that block. Select episodes were also released on DVD.