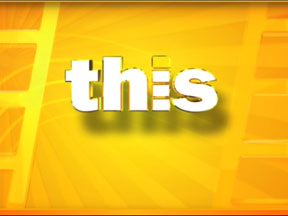 One of the multitudes of "digi-nets" found on broadcast television note networks carried on the digital subchannels on TV stations' over-the-air signals; it can also be seen on cable/telco systems if they carry the subchannel, and they likely do) This TV, a joint venture of Metro-Goldwyn-Mayer and Tribune Media, specializes mainly in movies from the MGM library (specifically, the stuff that wasn't acquired by Turner Broadcasting and then absorbed into Warner Bros..) Primarily, This TV airs all MGM films released after 1986, most of the United Artists library, and many other companies (such as Orion Pictures) that MGM has bought over the years, as well as television series late at night and early in the morning.
Advertisement:

Weigel Broadcasting was MGM's partner in This from its launch until November 2013. Under Weigel's supervision, This TV aired children's programming from the Cookie Jar Entertainment/DiC library, as well as Weigel's in-house E/I production Green Screen Adventures. They eventually transferred their share to Tribune, because Weigel had the far more successful MeTV to deal with, and they partnered with FOX to launch the Movies! digi-net.

From 2017-2018, This TV carried the Sinclair Broadcast Group's three-hour morning block of non-educational children's programming, KidsClick, which is also seen on other Sinclair-owned stations. KidsClick was supplemented by This TV's own block of acquired E/I programming.

TV series that have aired on This TV: