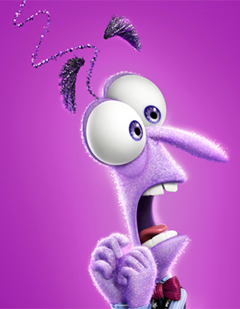 "Don't be afraid — they're only eyebrows."
"Don't forget the eyebrows that hover mysteriously over my head!"
— Ruff Ruffman, FETCH! with Ruff Ruffman
Advertisement:

In comics, webcomics and animation, eyebrows are very important to conveying expression, so it's important that they be seen. To this end, they sometimes actually float several inches above the character's head, or are otherwise clearly unattached. This may be a feature of the art at all times, or it may signify that the character in question is just that surprised. A subtrope of Unusual Eyebrows.

It doesn't have to be just eyebrows - watch enough animation and you'll eventually see disembodied whiskers and even entire body parts that appear to float separate from the main body.

If they're on the face but showing through the hair, that's Oddly Visible Eyebrows.