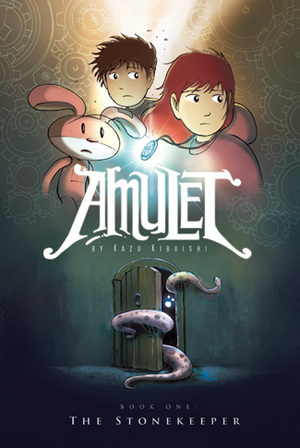 Amulet is the brainchild of Kazu Kibuishi, editor of Flight and author of the webcomic Copper and graphic novel Daisy Kutter. It's a series of graphic novels (eight, so far) chronicling the adventures of Emily, her brother Navin, and her mother, as they find themselves caught up in an subterraneous alternative world called Alledia. The eponymous amulet is found by Emily in a new house they move into. Alledia is home to wild and imaginative things like tentacled monsters, walking houses and talking trees. Here, Emily finds herself trying to not only keep her family together, but also fight an increasingly brutal war against an evil race of elves bent on dominating everyone else. She at least meets a lot of friends along the way to help her, although whether or not she can trust them isn't clear.

The series is confirmed to have nine volumes in total.