The Amulet series has many, many minor and major characters across several volumes. Warning! Spoilers may follow for some character sections.

"I may not be as clever as Max, or as skilled as Ronin, but don't ask me if I'm ready. Because no matter what happens, I'll have to be."

The protagonist, a young girl who was traumatized by the death of her father in a horrific car accident two years prior to the story. Since then, Emily is a serious, determined, and sometimes headstrong girl who ends up inheriting her great-grandfather Silas' Stone, an object of immense power which she uses to protect her family as they go through the world of Alledia. Over time, as she and her family move through this alternate world, she realizes she has inherited much more than that.

Emily's little brother, a young boy who enjoys playing video games and tries to be light and easygoing to make his sister laugh. At the start of the story he is much more cautious and afraid of everything happening around them in Alledia than Emily, and is naturally less trusting of every potential ally they come across. As the series goes on, he matures into a capable support to his sister and a force to be reckoned with behind a mech.

"My home is wherever you and Navin are. I appreciate your concern, but remember I'm still your mother."

Emily's mother. After the death of her husband David, Karen is unable to afford their home and moves her family into an old family house which happens to have a gateway into a parallel universe. Being kidnapped by an arachnopod in the first book, she's then poisoned for the majority of the second. After being cured, she takes up a more significant role alongside other members of the Charnon house for the rest of the series. 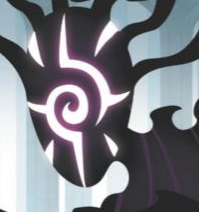 "Without power you cannot attain what you desire."

The sentient entity within the necklace that Emily found in her great grandfather's old library. It turns out to be a powerful spirit that grants Emily great magical ability as the Stonekeeper, having once granted it to her great grandfather. The voice from the Stone—identified by Emily as a he but otherwise ambiguous—also guides her throughout the series. The mysterious voice appears to have its own ambitions, however, and may not entirely have Emily's best interests at heart. 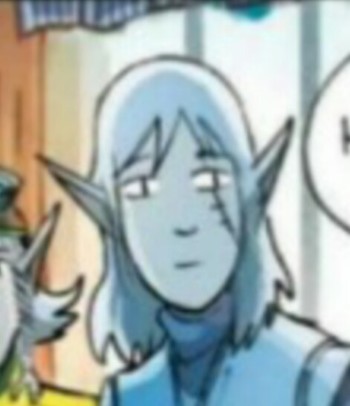 "I would pay any price to undo the mistakes of my ancestors."

The son of the elf king who wants to overthrow his father's rule for his own reasons, who quickly develops into a second protagonist. Although at first antagonistic towards Emily and remaining under the Elf King's thumb even as he intends to kill him, he becomes a troubled ally of the young Stonekeeper and her friends by the third book. He also has many issues of his own to sort out about his past and the history of his people; as the series progresses, he becomes calmer, more responsible, and more morally upright, becoming the just leader that the elf kingdom desperately needs.

A little bunny robot that was built by his previous master, Silas Charnon. He's assigned by his master to be Emily's primary guardian and guide through the land of Alledia, and is prominently featured through the first book. He often travels alongside Cogsley.

Another robot built by Silas Charnon that accompanies Navin and Emily through their journey. Although crochety and untrusting of the kids' abilities at first, Cogsley is nevertheless a very useful bot who provides a lot of advice and aid, particularly to Navin in piloting the Charnon house mech. 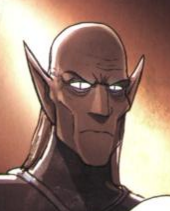 "The hunt has already begun."

The Elf King's right-hand man, who is partnered with Trellis to hunt down Emily in the second volume. He ends up being defeated and, after losing his stone, is reduced to a helpless old man who follows Trellis around and helps out with the rest of the cast. 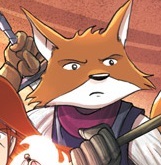 "You won't know the meaning of success without knowing how it feels to fail."

A fox-man that Emily encounters in Volume 2 who continually offers his services as a bounty hunter. Later it turns out that he was sent to prepare Emily for her responsibilities as one of the only people who can save Alledia, wishing her to continue her great-grandfather's work as a Stonekeeper to remove the Elf King from power. He since then takes up a role as her mentor and guide. 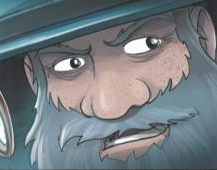 "This is what I get for listening to the toys of a madman."

An old Stonekeeper whom Miskit and Cogsley meet after being kidnapped by a Wyvern. He was a previous member of the council who knew Silas Charnon before his death. A grizzled old man, he ends up being an ally to Emily from the fourth book onward. 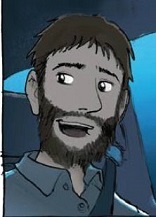 "You need to look after Emily. Let go."

Emily's father, who died in the prologue to the story proper after a tragic car accident. His death traumatized his young daughter and lead to her stoic personality in the present.

"And all you have to do is listen to the stone."

Emily's great-grandfather, known as an eccentric puzzlemaker who one day retreated into his study and was never seen again following the death of his wife. It's later learned he was living in Alledia, and that he'd been preparing for one of his descendants to come back and right his wrongs. He was a previous keeper of the Stone and had been largely involved in the conflict between the elves and humans in Alledia before becoming an invalid.

A nervous robot that was made by Silas Charnon who helps look after the Charnon house. After the main cast leave the house behind in the wilderness at the start of Volume 3 he and the other robots get much less screentime. 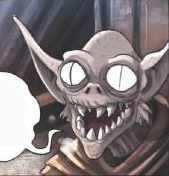 The doorkeeper assigned to keep watch at the entrance of the Elf King's palace, as well as a longstanding servant of the royal elf family of Gulfen. Before his work for the Elf King, he served Trellis' uncle Virgil.

A rodent doctor that lives in Kanalis. He makes his first appearance in the second volume in his clinic, where he advises Emily where to find an antidote to her mother's poison. He also is acquainted with Balan, a member of The Resistance in Kanalis. He later travels to Lucien with the Resistance.

An ox-man from Kanalis associated with the Resistance stationed there, as well as a friend of Dr. Weston. He becomes friends with Navin when the boy becomes the commander of the Resistance. 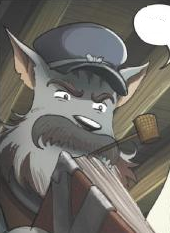 A cat man living in Nautilus who's the captain of the Luna Moth and Rico's older brother. He's one of the few that has ever seen the fabled flying city of Cielis, although no one believes him, and so Emily and co. seek his help reaching the city for themselves.

A cat man who works alongside his brother on an airship called the Luna Moth. He believes his brother's claim to have seen the city of Cielis and tags along with him and the rest of the cast when they go on their journey to it. 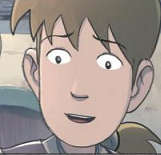 The young daughter of Captain of the Cielis Guard who lives in the city, and one of the few willing to stand up to the iron grip of the Council. While Emily deals with the Council on the inside, she ends up aiding her friends in the city proper. She returns in the fifth volume and strikes up a friendship with Navin as the two train to be pilots for the war.

A Stonekeeper that, like Emily, was selected to become a member of the Guardian Council and sent to survive the tests that would determine her worthiness. She and Pierce help Max and Emily to survive and find their way out.

A Stonekeeper that, like Emily, was selected to become a member of the Guardian Council and sent to survive the tests that would determine his worthiness. He and Ronin help Max and Emily to survive and find their way out, although he's not especially happy about helping Max.

Max's childhood friend, an elf that lived in Cielis, as revealed in a flashback in Prince of the Elves. Due to the war between elves and humans, she and her family were subject to racism and eventually killed when Max tried to help them escape the city. 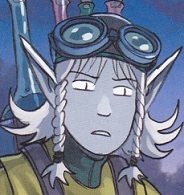 The elf mayor of Lucien, who makes her first appearance in "Escape from Lucien". She's a competent and caring mayor who is able to hold her own very well against the Dark Scouts, using her chemical bombs. She aids Navin and his unit in escaping from the overrun city.

The brother to the Elf King who is his exact opposite in every way, and who was predictably executed long before the start of the story. He is a wise and kind individual who provides (through flashbacks) the exposition of the truth about Alledia and its current war. He served as a mentor figure towards Trellis in his past.

The loyal, and terrifying army of Gulfen. 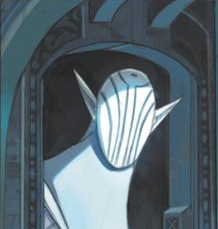 "I will destroy anyone and anything that may impede our progress. Think of it as a sacrifice for the greater good."

A mysterious dark power that threatens all life on Alledia, he is the current king of the elves. Once a quiet elf boy from a small village, he went mad with the power of his Stone and began an attack on the other civilizations of Alledia, ruling over the other elves with a corrupt and cruel rule. He's also Trellis' father and antagonizes him as well as Emily. 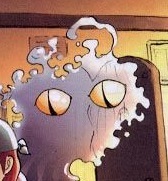 A Dark Scout, a gaslike being that can enter a being's nervous system and possess them, that appears alongside Trellis in the first volume. He's defeated quickly by Emily, but the Dark Scouts become a big problem later on in the series. 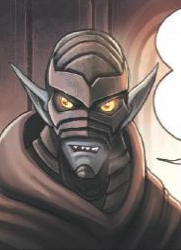 "I have never failed to kill my marks. You have no reason to doubt me."

A bounty hunter employed by the Elf King, although not only does he hate Stonekeepers, he has his own agenda about becoming king of the elves. His specialty is wiping minds and memories using a special gun, and flying on a gigantic bird. Becomes a problem in the Volume 3 and returns in Volume 7. 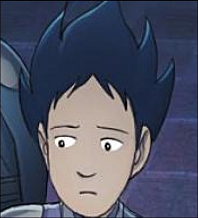 A boy that Emily meets at the conclusion of her search for Cielis. He is one of several candidates, including Emily, to join a special school that will train them to become members of the Guardian Council. It soon turns out that the school isn't all that it seems and the two work together. Later, however, Max himself is revealed to not be all that he seems either.

A mountain giant identified as the first Stonekeeper to be given a piece of the stolen Mother Stone as part of Max's alliance with the Elf King, that Max frees from the Ice Prison of Korthan at the start of "Prince of the Elves". He and Max apparently have a history and the giant is completely loyal to the Stonekeeper.