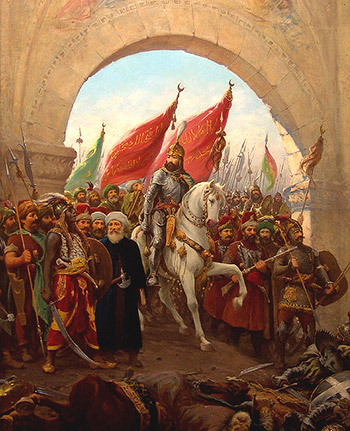 Throughout history, there have been a few individuals who have had a marked personal effect on the course of events around them. Some did this through political or sometimes aesthetic means, but most of those who were single-handedly instrumental in deciding the path of history have been military leaders. It seems that certain men combine a rare set of natural traits — leadership ability, tactical thinking, staggering ambition, copious ego, and a large dose of suicidal bravery, all combined with a visionary drive to rule the world and the imagination to see it done — to create a whole individual who is patently capable of turning even a ragtag band of woefully underfed and poorly equipped vagabonds into a fighting force that is not only formidable but easily capable of crushing any opposition that stands before it.

A true Conqueror strives to claim the whole of the known world through military means and often succeeds. (Note that he often doesn't put much thought into running it once he's taken it; he just wants the bragging rights). This is in contrast to those characters who rise to universal power through other means (such as subverting the democratic process or literally being appointed dictator by a legislative body).

The easiest way to recognize this character is by what he manages to accomplish. If he doesn't take over two or three countries (at least) in the course of the story, he's not The Conqueror.

Most Conquerors are by nature Magnificent Bastards. Some even dip into Omnicidal Maniac territory. They are also their own Trope Namers. Quite often, these characters appear in the Backstory of a setting, and all that is left of their conquests is a Vestigial Empire.

These fellows often get "The Conqueror" as a sobriquet—frequently one of many.