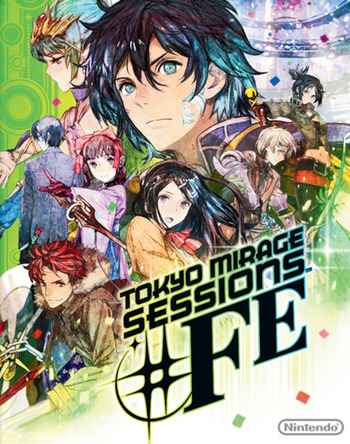 The road to stardom has never been this rough.

Mirage Sessions revolves around Childhood Friends Itsuki Aoi, an Ordinary High-School Student in modern day Tokyo, and Tsubasa Oribe, an aspiring Idol Singer with a Dark and Troubled Past. During Tsubasa's first professional audition, the concert hall is invaded by supernatural beings called "Mirages"; spirits who seek to devour the creative energy all people possess in their hearts, called Performa. While attempting to escape, Itsuki and Tsubasa end up fusing with two Mirages, named Chrom and Caeda, after using their own Performa to free the mysterious spirits from the dark force controlling them.

The two are soon approached by the Fortuna Entertainment talent agency, whose clients are all "Mirage Masters" like themselves, to help fight off the invading Mirages while perusing their own careers in the entertainment industry. And so, despite his disinterest in showbiz, Itsuki joins the agency to realize the dreams of Tsubasa and their new friends, and put a stop to the supernatural menace that threatens to destroy all of Tokyo.

An Updated Re-release, Tokyo Mirage Sessions ♯FE Encore, was released for the Nintendo Switch on January 17th, 2020, which includes a new song and additional content.