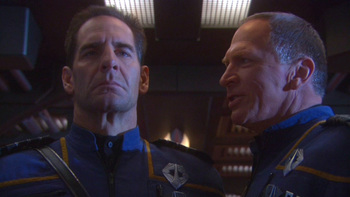 Long live the Empire!
In the teaser, set April 5, 2063, Zefram Cochrane greets the Vulcan emissary making First Contact with the human race...only to draw a shotgun from under his coat and shoot him. The humans then storm the spaceship, intent on plundering its advanced technology. Yes, it's the Mirror Universe, where Humans Are Bastards and Might Makes Right.
Advertisement:

In the year 2155, however, things aren't going well for the Terran Empire, which is facing a successful rebellion among the alien races they've conquered. On the ISS Enterprise, First Officer Jonathan Archer hopes to repeat history with a raid into Tholian space. The Tholians have opened a rift into a future Alternate Universe from which they've seized the Constitution-class starship USS Defiant. With speed and firepower a hundred years in advance of anything in the Quadrant, and a database full of subversive ideals, the Defiant is a Game-Breaker that could save the Terran Empire...or bring it to its knees.