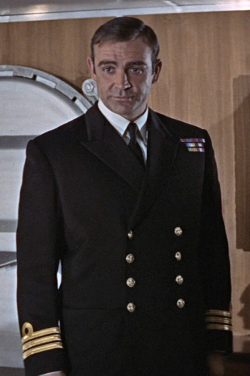 "Bond, Commander James Bond."
"No matter what scars you bear
Whatever uniform you wear
You can fight like a krogan
Run like a leopard
But you'll never be better than Commander Shepard!"
— Miracle of Sound, "Commander Shepard"
Advertisement:

Maybe because it sounds really cool, but Commander is a very popular rank in fiction.

In real life navies, "Commander" is the second-most senior field rank, right below the rank of Captain. A commander is usually the first officer (i.e. the Number Two) of a large ship, but can also be the commanding officer (a.k.a. The Captain) of a smaller ship. There is also a "Lieutenant Commander" rank directly below, who will be either an assistant to these officers or the captain of a smaller ship. Some air forces have a "Wing Commander" rank that is equivalent to a naval commander. In an army, the equivalent is either major or lieutenant colonel, depending on the country. When it's not used as a rank, it may still be used in a role title (e.g. "unit commander", "mission commander").

When using Common Ranks, is subordinate to Colonel Badassnote although in many Real Life militaries they're actually equivalent and superior to Majorly Awesome. When used as a General Staff Rank, is usually superior to The Brigadier and subordinate only to the Four-Star Badass. Outside of militaries, some large police forces have a commander rank for officers (e.g. London, Los Angeles and Chicago). This rank sits between the assistants of the chief and the local police station managers.

In science fiction, commanders usually have their traditional position as executive officer. Some works will have commander as the highest senior rank on a starship or a general staff rank, along with the title or rank (or both) of the supreme leader of military forces. A commander who is decidedly uncool may be a Commander Contrarian.