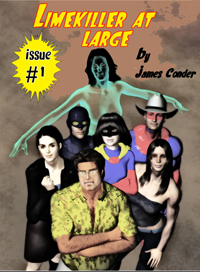 Limekiller at Large is an American comic book series, which began in September 2011. It is written and illustrated by James Conder.

When the head of the Extra-Normal Abilities Management Agency, James Hannigan, is killed in a car accident, his daughter Michelle is mysteriously whisked off to the medical ward of the Citadel of Integrity.

E.N.A.M.A. employee Arizona Ryder has her own problems, mainly the fact that her superhero husband is constantly chasing anything female. So the last thing she needs is to be shipped off on assignment to Florida, especially considering that she's a secretary, not an agent.

Why has Arizona been sent here? What connection does Michelle have with the deceased superheroine Ms. Premium?

And what the heck does it all have to do with Marty Limekiller, former janitor to the League of Integrity?

Limekiller at Large is a combination of book and comic book, switching between Walls of Text and periods of comic book-style sequential art.