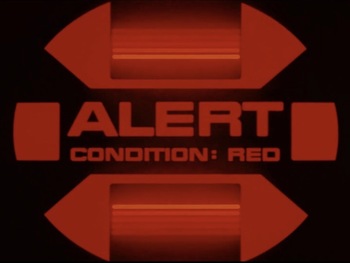 All hands to battle stations!
The sirens shrilled, urging everyone to panic.
— Tomorrow Town
Advertisement:

The phrase "Red Alert" comes from the naval tradition of "General Quarters" (also known as "Battle Stations", or "Action Stations" if you're British), an announcement made when a ship prepares for battle. Whatever the wording used, most of the procedures are the same. The alert is sounded by a drum or over an intercom. Off-duty sailors report to their stations, cannons are loaded, and the decks are cleared of non-essential items. On modern ships, lights flash, klaxons sound and all watertight doors are closed to contain leaks if the ship is holed. BREET BREET Ah, great. See Red Alert right away, the Wiki's gone on Self-Demonstrating Article mode. BREET BREET GENERAL QUARTERS. Often accompanied with This Is Not a Drill.

In a Rescue show, or any film with an emergency service like the fire department, there is a variant of the alert that can be called the Emergency Squad Scramble. where the heroes are at their base and the dispatch call sounds. Suddenly the base explodes with activity as the klaxons sound and the dispatcher comes over the PA system with the essential information. Meanwhile, the rescue heroes move quickly, often going down sliding poles to the garage, calmly to suit up and board their vehicles with utter professionalism. Then with the vehicles' rotating lights flashing and sirens sounding, the production's theme music plays the heroes go full speed to the emergency.

This variant also occurs with fighter squadrons before or during a Fighter-Launching Sequence . This often includes a running variant of the Power Walk that can be called the Scramble Run where the pilots are seen sprinting to their fighters in full flight gear.

Often, all the ordinary lights in the building will be replaced with ominous red lighting, making it abundantly clear that the Alert is indeed Red. (In Real Life, it's generally helpful to keep using ordinary lighting so you can actually see what you're doing.)

If this precedes a Boss Battle, it's a Boss Warning Siren.

Now, keep in mind, this is not to be confused with Command & Conquer: Red Alert, nor with Last Alert (known as Red Alert in Japan), nor with the Red Scare. Nor does it have any particular relation to any of the Transformers characters named Red Alert (WOO WOO WOO WOO). But it is similar, however, to Defcon Five. Err...one. And to Red Filter of Doom.

See also Emergency Broadcast for a version of this for crises affecting entire communities or larger areas.

Got all that? Good. Let's move out.