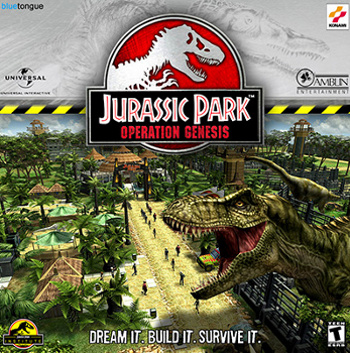 The park is open.
It's yours: Jurassic Park! It's your job to make it work. Just build the Park and populate it with dinosaurs. Lots of dinosaurs. This will be the greatest theme park in the history of the world! Your job is to keep the Park gates open. Prove to InGen that the Park is viable...and safe....Oh yes, you have a T. rex. But don't forget, she's a hunter! Design it. Build it. Breed dinosaurs. It's yours: Jurassic Park!
— John Hammond
Advertisement:

Jurassic Park: Operation Genesis is a business simulator developed by Blue Tongue Software, based on the Jurassic Park franchise, and released in 2003 for PC, PS2, and Xbox. The player's goal is to build Jurassic Park and make it a profitable success.

In August 2017, a spiritual successor titled Jurassic World: Evolution was announced for the PlayStation 4, Xbox One, and PC.