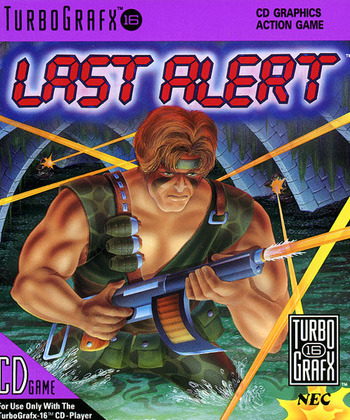 "People will hate you, Steve, if you're too sting-ee."
Advertisement:

Last Alert (Known as Red Alert in Japan) is a 1989 shooting game by Telenet Japan released for the Turbo CD, infamous for its English voice acting.

In Nov 20, 1988, Guy Kazama, the main character, leads a mission to rescue hostages at the request of Chairman Steve of Lloyd's Government. But they are betrayed when they don't find any hostages; a chopper guns down the whole squad instead. Guy is the only survivor and a year later, a terrorist group known as the Force Project forms, consisting of four members. Besides the arms dealer Chairman Steve, there's Colonel Kadat of the republic of Lybid; Mr. Lee of the Hong Kong Mafia and Dr. Garcia, a brilliant physicist. Guy is recruited to take them down and get his revenge.

The Run-and-Gun gameplay is very reminiscent to Commando, varied by adding features like being able to shoot a different direction from moving, powerups, and a level-up system.