Video Game / The Legend of Kage 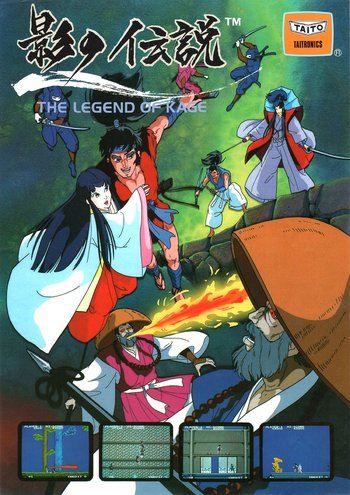 The Legend of Kage is an action game developed for arcades by Taito in 1985 and ported to various 8-bit systems and computers, including the Nintendo Entertainment System.

The player controls an Iga ninja named Kage, and he has to rescue a princess named Kiri from an evil shinobi clan. Kage is armed with a kodachi shortsword and an unlimited supply of shurikens, and can also jump ridiculously high. Kage must fight his way through a forest, a waterfront, and a temple to defeat the villains and rescue Kiri, and then do it all over again with faster enemies and a new color palette to reflect the changing of the seasons.

More than two decades later, in 2008, Taito and Lancarse released The Legend of Kage 2 for the Nintendo DS, published by Taito's new parent company, Square Enix, outside of Japan. The basic plot of Kage 2 is mostly the same as in the first game - Kage is still fighting to rescue Kiri (now called "Kirihime") from the villains Yoshi ("Yoshiro") and Yuki ("Yukinosuke") - but now Kage has a new ally in the kusarigama-wielding Chihiro.

The Legend of Kage is considered a Spiritual Successor of Ninja Hayate. The two games are alike in setting and design, to the point the two main characters could be mistaken for one another.

Compare and contrast Mirai Ninja, yet another ninja-themed arcade game with similar gameplay.

Tropes applicable to both games: