Try to Fit THAT on a Business Card! 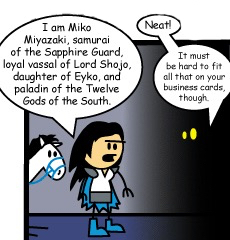 Missandei: You stand in the presence of Daenerys Stormborn of House Targaryen, rightful heir to the Iron Throne, rightful Queen of the Andals and the First Men, Protector of the Seven Kingdoms, the Mother of Dragons, the Khaleesi of the Great Grass Sea, the Unburnt, the Breaker of Chains.
Davos: ... This is Jon Snow... He's King in the North.
— Game of Thrones
Advertisement:

If there's one way to impress upon the viewer the general awesomeness of a character, it's to give him the titles to show for it. Often, the first mention of a character with loads and loads of titles is, or will be closely followed by, a formal introduction or a signature of a formal letter.

Another common vector for the Long List is a Badass Boast, especially if the titles were awarded for martial achievements or general badassery. Done improperly, he'll just come off as "Jimmy the Longwinded, He of Many Titles" (although this can be deliberate when the trope is Played for Laughs).

This is very much Truth in Television, in that many reigning monarchs tended to possess an impressive array of titles. In the modern day, loads and loads of titles can be found on accomplished British citizens. It can also come from having several academic degrees; compare Omnidisciplinary Scientist and Renaissance Man.

A subtrope of Long List and The Magnificent. May be combined with Overly Long Name. Arson, Murder, and Jaywalking is likely to be involved, as the most impressive titles will generally be listed first. Compare Some Call Me "Tim", They Call Me MISTER Tibbs!, I Have Many Names, someone has multiple, separate names, and Name That Unfolds Like Lotus Blossom, which is a name that's more like a description, and therefore has length. Contrast Just the First Citizen, The Master and similarly styled Names to Run Away from Really Fast, where brevity is the soul of intimidation. If they also happen to announce it (or someone else does it for them) a lot then it's also a Large Ham Title.

Note that this is a textbook rendition of George II's actual titles.