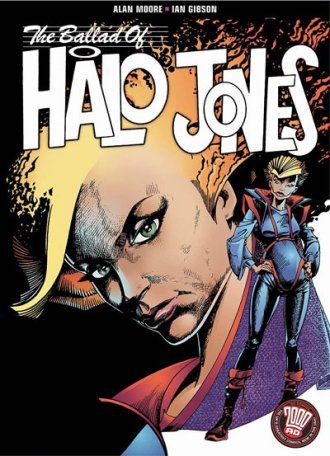 Halo: I'm going out.
Rodice: Out? Out of where?
Halo: Out of everywhere.
Rodice: But, listen, the problems will still be here when we get back...
Halo: Who said anything about coming back?
Advertisement:

Considered by some to be Alan Moore's magnum opus, and also his most famous incomplete work, Halo Jones is a trilogy of stories written by Moore and drawn by Ian Gibson that feature the life of a young working class woman who went on to become a legend.

Planned to run nine volumes, with each volume skipping ten years in her life to show Halo at different points in her existence, only the first three volumes were completed and published in 2000 AD. The serial was abandoned due to disputes between Moore and the publisher over ownership rights to the characters.

Halo Jones is an 18-year-old living in futuristic floating housing estate on Earth called "The Hoop." The Hoop is filled with the poor, beggars, Proximans, and a strange cult called the Different Drummers (who have an implant which generates a perpetual drumbeat in their heads that occasionally make them violent). Halo, along with her friend and house-mate Rodice and mechanical dog bodyguard Toby, traverse the Hoop and get into various adventures in trying to buy food for their other house-mate Brinna, who shelters them. Hilarity Ensues as they encounter various obstacles to getting home, but they finally get home in one piece...to find Brinna murdered and their other house-mate Ludy joining the Different Drummer cult. With no place to live, Halo announces her decision to go into space,

Book Two features a Time Skip as Halo is working as a hostess about a space cruise ship, with fellow hostess and roommate Toy and the Invisible to Normals Glyph, various events happen. The first hints of a war in the Tarantula Nebula emerge and it's revealed Toby killed Brinna because he loves Halo and wanted to be with her. The book ends on a cliffhanger, revealing that Halo is destined to become a great war hero.

Book Three begins after another Time Skip, showing various occupations Halo was in after she left the Clara Pandy. She ends up, ten years later, on the planet Pwuc "where the Catsblood never runs out but the dreams do." There, she meets Toy again, who persuades her to join the army, currently engaged in brutal guerrilla war in the Tarantula Nebula. As a part of Platoon B, Halo sees the horrors of war, as most of her platoon mates die, culminating in the death of Toy. Halo quits the army after that, but with nothing to do and no job, she starts to go crazy and reenlists. And then gets sent to Warzone 1, the planet Moab, where the intense gravity does strange things to time, where the battles last five minutes and two months, and where Halo meets General Cannibal. As the war ends, Halo discovers her inadvertent complicity in Gen Cannibal's war crimes, kills him and is last seen stealing his spaceship to take her off to new adventures.