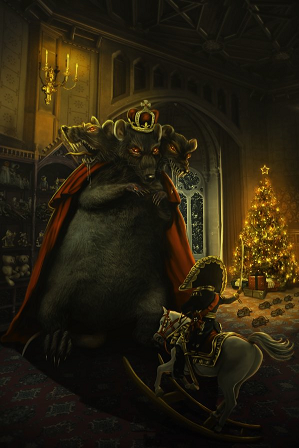 .
"Through your eyes, brothers, I finally see the world for what it really is. This city is infested. Eight million parasites, scrambling around in their pointless lives, spreading disease, forcing us to live in the shadows, like vermin. No more. They are the true plague. Together, we shall rid this city of humanity, and reclaim it for ourselves. And no one, not even those vile turtles, shall stand in our way."
— The Rat King, Teenage Mutant Ninja Turtles (2012), "I, Monster"
Advertisement:

Because rats are social, have long tails, and happily live in dirty environments, they occasionally get stuck together. In particular, their tails can become tangled, and they're unable to separate themselves once this happens—though they usually groom themselves well enough to keep this from happening in the first place, making the phenomenon thankfully rare. As rare as it may be, though, it's spectacular enough that humans—long-time unwilling companions of ratkind—have noticed these unfortunate entities and ascribed them with special properties. Details vary by region, but generally they're held to be omens of plague and other rat-based calamities.

Rat kings in fiction tend to have greater than typical intelligence, even on par with a human being, and the right to command other rats, be it through some conferred rat respect or overt psychic control, potentially turning a dissociated nuisance into a swarming wave of diseased, omnivorous devastation. They may be viewed as the manifestation of a rat Hive Mind, the rodent equivalent of a Hive Queen. Storytellers who either haven't done the research or don't like the "several rats conjoined by their tails" image may instead depict Rat Kings as royalty of some sort, typically Rodents of Unusual Size or anthropomorphic Rat Men imbued with greater intelligence and rule over other rats.

Note that some Pest Controllers control rats. In order to count as Rat Kings, they must be rats themselves, or at least very rat-like. Wearing a rat costume doesn't count.

Not to be confused with the book by James Clavell or the one by China Miéville.

One of the characters in Jeff's show is the noble mouse King Colby-Jack II, a Rat Folk alien king who helps Steve get an oil change in return for a review of Black Brigade.

One of the characters in Jeff's show is the noble mouse King Colby-Jack II, a Rat Folk alien king who helps Steve get an oil change in return for a review of Black Brigade.