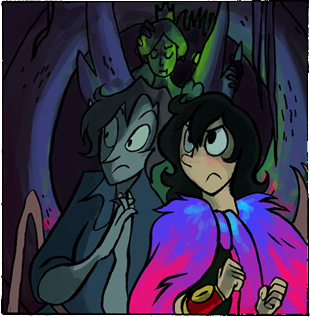 Flint and Snarlbear
"Basically, everything here wants to maul and/or eat you. It takes a little getting used to. On the other hand, if you happen to like lurid hellholes, this place is a magical wonderland."
— Flint
Advertisement:

is a fantasy webcomic by Natalie Riess

about Daisy, a young woman who always daydreamed of being a heroic fantasy warrior, who got pulled from Earth into the Rainbow Dimension.

There she killed a rainbow... bear... thing, inadvertently rescuing both the diminutive locals and Flint, a sort of grey elf... thing. There are lots of things in this comic.

The locals, in celebration, held a party for Daisy, who also was given by them a cape made of the hide of the creature she killed and the "professional monster puncher" title of "Snarlbear", and for Flint, Daisy's self-proclaimed "agent" — and that's the beginning of their adventures!

The comic itself finished its run on February 10, 2017, after nearly five years. This means that, unlike many webcomics out there, reading it wouldn't take a massive dedication to the cause. Instead, it would take something a bit closer to two hours, more or less.

The comic is hosted on hiveworks and it can be read from the beginning by clicking here.