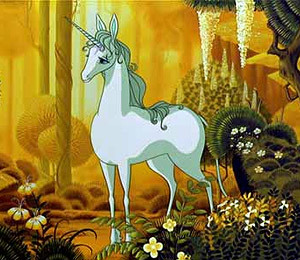 Sure, your daughter wants one now... but for all you know, it could make a Kebab from her guts with its head.
"Why did they go away, do you think? If there ever were such things."
"Who knows? Times change. Would you call this age a good one for unicorns?"
"No, but I wonder if any man before us ever thought his time a good time for unicorns."
— The Last Unicorn
Advertisement:

A Mythical Motif representing purity, rarity and wild beauty, the unicorn has appeared in heraldry and fairy tales for centuries. Its origins come not as a mythical creature but as a beast of natural history recorded by ancient Greek historians.

Pliny the Elder was one of the earliest writers to study unicorns and certainly one of the most influential: "The unicorn (monocerotem) is the fiercest animal, and it is said that it is impossible to capture one alive. It has the body of a horse, the head of a stag, the feet of an elephant, the tail of a boar, and a single black horn three feet long in the middle of its forehead. Its cry is a deep bellow." We recognize this today as a very fair description of a rhinoceros.

Today's conception of a unicorn is nearer to the medieval one: a narwhal's horn, a horse's head, a deer's body and cloven hooves, a goat's beard and feet and a lion's tail. Some works forgo most or all of these features and depict the Unicorn as simply a horse with a horn in the middle of its forehead. Occasionally even wings are added, blending the unicorn with the Pegasus — this is typically done to signify that the Unicorn is even more special than normal. The creature itself is almost always white or cream in color. Exceptions are usually pitch-black, usually but not universally signifying evil specimens, but zebra-striped unicorns turn up from time to time.

As the common fare of little girls' fantasies, the origin in histories becomes quite ironic. Even in stories where All Myths Are True and obvious and are coming round for tea later, the unicorn will still keep a mythical status, staying rare and secretive. Further irony is added by the fact that it started off as an incredibly wild and violent beast that was completely untameable before evolving into one of the softest and most child-friendly motifs. After all, it is the national animal of Scotland.

The switch is linked to one of the most common paired motifs — the virgin and the unicorn. Only a virgin maiden would be able to attract the Unicorn to her. Broadly, the story always goes on the lines of the maiden attracting and soothing the unicorn until the hunters who convinced her to do so can attack and kill the unicorn for its horn. Sometimes the maiden is just followed, sometimes knowingly involved and tricked. The implication is that the unicorn was so fierce and wild only an innocent girl's purity could conquer it. What happens if she's not a virgin is not popular nowadays; nor is the other medieval way of catching it: tricking it into charging you when you stand in front of a tree and dodging, and it will be unable to pull itself free.

Either way, when they're good, the most important unicorn association is purity; harming one can often be a sign that a character is a villain. Indeed, the connections with maidens is probably why the unicorn has become gentle in popular culture and myth for several centuries. In modern days, unicorns are often part of a Sugar Bowl theme. In fantasy settings, unicorns are often associated with good factions and/or forest-dwelling fairies and elves. They're also strongly associated with nature, steering clear of farmed or urbanized areas and barren wastes alike and typically living in deep, magical forests. If used as mounts, their riders will almost always be women. Portraying unicorns as aggressive is one of the more common fantasy subversions — or perhaps the writers of today still haven't forgotten Pliny's vicious unicorn. It's a resurgence not unlike the reappearance of The Fair Folk. Truly evil unicorns, however, are relatively rare and often explicitly tainted, desecrated or otherwise "wrong" in some manner, and often have black coats.

Another traditional element of the unicorn that is less popular — despite its connections to purity — is the ability of a unicorn's horn to purify poisoned items and act as a Magic Antidote to poison.

The ungulate-with-one-horn unicorn is most familiar, but is certainly not the only unicorn in myth. Other variations include the Kirin, an Eastern variation that (sometimes) looks something like a cross between a typical unicorn and a dragon, the fierce, ox-like Karkadan, and the very different Al Mi'raj, a vicious rabbit-like unicorn. They each have one horn, so technically...

"Alicorn" originally was the name of the horn of a unicorn. The word is still around, but there are multiple different meanings. Sub-trope of Group-Identifying Feature.

There are a few related pages and subtropes:

Often overlaps with Virgin Power and All Girls Like Ponies.

A Sub-Trope of Cool Horse.

Compare Pegasus and Our Hippocamps Are Different. Only related to Dead Unicorn Trope by name.

By no means to be confused with Unicron.