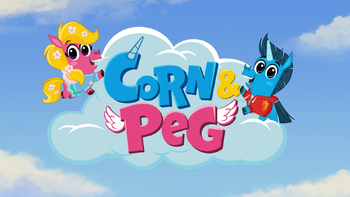 What do we do? We describe Corn & Peg here!

Corn & Peg is a Canadian preschool-oriented cartoon produced by Nelvana that aired on Nick Jr. in the United States and Treehouse TV in Canada.

It involves a unicorn and pegasus named Corn and Peg, respectively, who seek to help others and make the world a better place in their community of Galloping Grove by doing good deeds.

A sneak peek of it aired on February 22, 2019, and officially premiered on March 4th. It moved to the Nick Jr. channel in September 2019.

It is currently unknown if the show will be renewed for season three, but many fans have indicated that the show may be cancelled, as the show had fairly poor ratings, leading it to be Screwed by the Network in 2020, and the page on the Nick Jr. website was taken down in 2021, and now redirects to an error page.

The opening theme to Corn & Peg.

Example of:
"Do It Yourself" Theme Tune

The opening theme to Corn & Peg.