Film / Voyage of the Unicorn 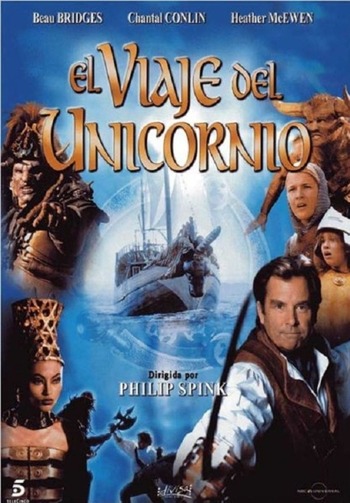 Made-for-TV Movie about a family consisting of a single father, Professor Alan Aisling (Beau Bridges), with two daughters, nine year old Cassie and fifteen year old Miranda, who, after escaping an attack by Trolls in the real world, end up going on a journey in a fantasy world. They find out they are involved in a prophecy involving Trolls taking over a fantasy world. Naturally, this family are the chosen ones.

The family ends up traveling around to different islands on their ship, the Unicorn, and go on a series of largely unrelated adventures in the pursuit of their main goal: fulfilling the prophecy and finding the dragon skull that will end the trolls' reign of terror. Clocking in at over 2 hours and 40 minutes, the film is almost a Door Stopper in movie form, as it was originally delivered as a 2-part film.

An adaptation of the richly illustrated children's book Voyage of the Basset. Some things have changed in the adaptation, such as Aisling being less of a jerk who's obsessed with proving his journey to people at any cost, and the removal of the gremlins and harpies, but at the same time, much was added to the plot and the characters were fleshed out a lot more, making this both an Adaptation Distillation and Adaptation Expansion.