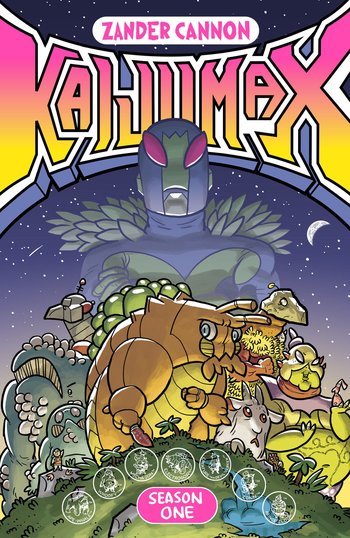 Kaijumax is an ongoing comic series from Oni Press by Zander Cannon, creator of the graphic novel Heck and one of the creators on Top 10. The comic is centered around an island prison whose inmates are Kaiju and guards have powers similar to Ultraman.

The comic is published in "seasons" with six "episodes" a season, covering plotlines related to the inmates, the guards, and (on occasion) the world outside the prison. Season one introduces Electrogor, an insect-like Kaiju who has been captured for his crimes and sent to Kaijumax. Electrogor just wants to get back to his children: he was foraging for food ("food" being the current from power cables he was chewing on) at the time of his arrest. With the help of the Green Humongo, Electrogor escapes.

Season two follows Electrogor on his journey home, while Jeong, formerly a Kaijumax guard, finds work with the long arm of Kaiju law and love with his new partner Chisato. Season three finds Electrogor back at Kaijumax, where the tensions between rival prison gangs (the J-Pops and the Cryptids) culminate in a Prison Riot.

Season four shifts focus to a separate island facility where the female prisoners are kept, among them Goat (a character introduced back in season two) and prison doctor-turned-inmate Zhang. Things are... different at this prison, but as with the prison for the male Kaiju, conflict seems inevitable. Season Five takes a look at the court system, as a murder trial for a notorious gang leader gets underway, while the decades-old murder conviction of another Kaiju comes into question. Season Six, which Zander Cannon has said will be the last, deals with an Alien Invasion.