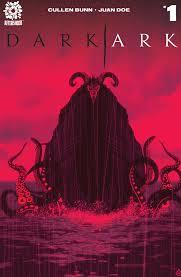 Dark Ark is a 2017 comic book by Cullen Bunn and Juan Doe published under AfterShock Comics. In the Biblical times, God unleashed the Great Flood to wipe out the wickedness of man and tasked Noah with building an ark to save his family and the animals of the world. At the same time, Satan has commanded the sorcerer Shrae to build his own ark and save the monsters and unnatural creatures such as vampires, dragons, serpent-folk etc. However, this is not all of Shrae's mission: the Devil instructed him to ensure that Noah and his ark survive the Great Flood as well, just so that his own creatures can continue preying on mankind. If they do, he will relinquish control over his souls and allow them to ascend to Heaven, but if Shrae fails, then all the monsters aboard will devour him and his children, and they shall be damned to Hell. But with their own supplies running short, and the unruly passengers of the Dark Ark turning on each other, is Shrae even capable to keep his own family safe?

The first series was concluded with 15 issues and a second one titled After the Flood began in October 2019.

A one shot, Dark Ark: Instinct was released for 2020 Free Comic Book Day.