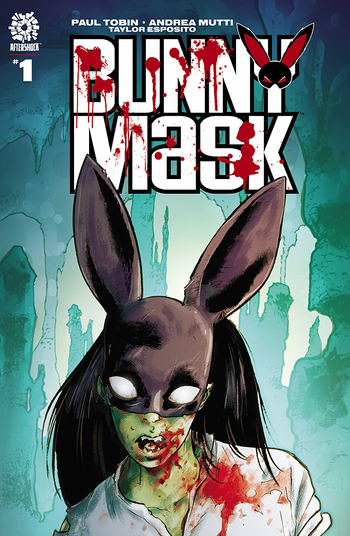 Is there sickness?
Advertisement:

Bunny Mask is a 2021 horror comic written by Paul Tobin, with art by Andrea Mutti. It is published by AfterShock Comics.

14 years ago, Dr. Tyler Severin and his partner from Child Protective Services visited the home of Bee Foster and found her father waiting. After Leo Foster killed his partner, he forced Tyler into a cave and made him dig, telling him about the voice of "the Snitch" and that he was trying to find "a revelation." And then Tyler broke through a wall in the cave and unleashed something even more horrific — something which took the form of a young girl in a bunny mask.

In the present day, all Tyler wants to do is go about his life and forget the events of fourteen years ago, but when he unexpectedly finds Bee again, now working as a young artist, he realizes that their lives are more intertwined than he first thought.

And the girl in the Bunny Mask is much older and darker. And now she walks our world.