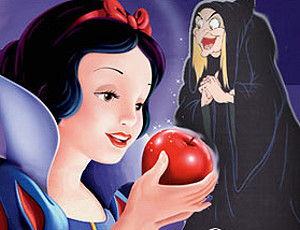 Careful, Snow. That apple probably isn't as sweet as you think.
"There never was an apple, in Adam's opinion, that wasn't worth the trouble you got for eating it."
— Good Omens

Apples are very frequently used to symbolise temptations and lusts of many kinds. Often this is by indicating that a given choice of action is alluring but will have extensive harmful consequences later. When used as a character motif, it tends to signify someone who frequently offers such temptations or indulges in them.

There is a short list of examples that are exceptionally iconic:

Details for these four are in the examples. Because of their influence, apples are very likely to specifically symbolize the temptations of secret knowledge, health and immortality, beauty, and wealth. They are also likely to be poisoned or be associated with snakes.

See also Forbidden Fruit, which, despite the title, is not strictly about fruits. Has nothing to do with Tempting Fate (At least, probably).