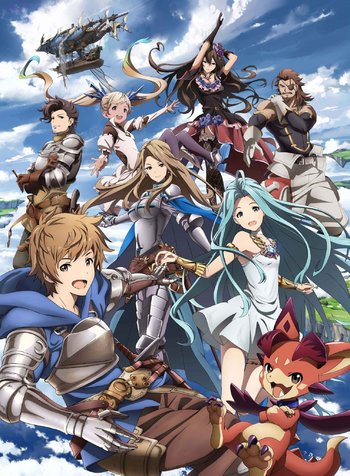 Set in a World in the Sky, a fateful encounter changes the lives of Zinkentstill residents Gran and his little dragon companion Vyrn as they run into Katalina and Lyria. The two strangers are being chased by soldiers of the Erste Empire, a government that tries to rule the world by military force. Like a hero, Gran assists them in repelling the pursuers. But during a fight against the Hydra that almost took out his life, Gran formed a link with the Girl in Blue, connecting their life force. With new companions by his side, Gran embarks on a skyfaring journey to reach the island of Estalucia, as written in a letter he received from his missing father. This also gives Lyria and Katalina the fighting chance to run away from the Empire. As they travel towards their destination across several floating islands of the Skydom, they even meet more friends and adversaries along the way.

The anime adaptation of the mobile game, officially titled Granblue Fantasy The Animation by A-1 Pictures, airing in the Spring 2017 Anime season.

The first two episodes were aired in January as part of an hour-long special, with the 13-episode season (Including the finished versions of the first two episodes) kicking off on April 2, 2017. The season's 12 episodes cover the first chapters of the Girl in Blue Arc from the game's main story. The 13th episode, "Another Sky" is a separate story featuring Djeeta taking the role of Gran as the captain, with guest appearances of some of the game's fan-favorite characters. An OVA bundled with the seventh Blu-Ray and DVD was released on November 29, 2017 under the title of Granblue Fantasy The Animation: Jack O'Lantern.

It is available on Crunchyroll both subtitled and dubbed, marking it the first truly official Granblue media to be released in the West.

began airing on October 4, 2019. This time, it is an Art-Shifted Sequel, with MAPPA being in charge of the new artstyle and animation.

Similar to the video game it is derived from, this anime has no relations to Grand Blue, and also not to be confused with the similarly-sounding Granbelm.

Aside from those listed at the main page, the anime contains the following tropes: