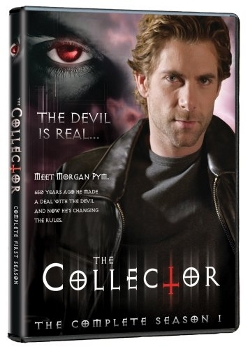 Ah, Hell. Isn't it lovely? These are all my little souls. I used to gather them myself, but by the 14th century, I needed some help. That's how I found Morgan. He was a monk back then, so he played hard-to-get, but I found that with the right bait, you can catch any fish you want. In the end, he came to work for me. He became a collector. Then, recently, he made me the most interesting proposal. He wants to seek salvation for his clients. I decided to let him try — for now.
—The Devil, Opening Narration
Advertisement:

The Collector (2004-2006) is a Canadian TV series about a man, Morgan Pym (Chris Kramer), who made a Deal with the Devil to save his love. He now helps collect the souls of others who made deals, and is allowed 48 hours to help them seek redemption before their time is up.

The other main characters are Maya Kandinski (Carly Pope/Sonya Salomaa), a former prostitute and drug addict who reminds Morgan of his lost love; Jeri Slate (Ellen Dubin), an investigative reporter who notices something strange about Morgan; her son Gabe (Aidan Drummond), an autistic child with a mystical connection to Morgan; and her sister Taylor (Christine Chatelain), who takes care of Gabe when she's gone.

Not to be confused with the 2005 Serbian sci-fi series

Sakupljač (The Collector), or 1963 novel The Collector, or the 1965 William Wyler film based on the novel.