Off with His Head! 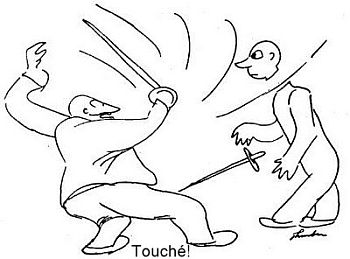 Heads Up!
"You don't kill a man by mucking around with rifles, arrows, rocks or other long-distance rubbish. You kill him by grabbing the biggest bloody sword you can find, running up nice and close to him, and chop the dumb bastard's head off!"
— Team Fortress 2

If you're dealing with any sword-oriented media, whether it be fantasy, medieval, kung fu, or something else, and it's more violent than a PG-13 rating, chances are, someone is going to get his head chopped off (and it may not even need the R rating if you're dealing with nonhuman enemies). One of the most common methods of execution back in the medieval era next to hanging, decapitation is usually one of the surest ways to ensure someone is Deader Than Dead barring some very potent magic or divine intervention. Indeed, in Real Life, it is one of the very few ways that death can be instantly diagnosed.

It is nearly always depicted as being surprisingly easy to cut through someone's whole neck and spinal column, even in one blow to a moving target. While Anne Boleyn did get beheaded with one stroke, most pre-guillotine beheadings took at least three strokes. Boleyn's executioner was—by request—a professional swordsman who would know how to cleanly behead someone. And that's when the target is helpfully restrained; in an actual Sword Fight it would have been even harder to pull off and would also have been serious overkill. A direct cut through the skull into the brain—or a strike to the neck that would at least sever critical blood vessels or the windpipe if it didn't cut through the spine—was usually more expedient.

Also see Alas, Poor Yorick, Decapitation Presentation and Severed Head Sports. When cutting off the head is the only way to kill something, it's Decapitation Required. If the decapitated head is somehow still alive after the fact for any notable length of time, that's Losing Your Head.