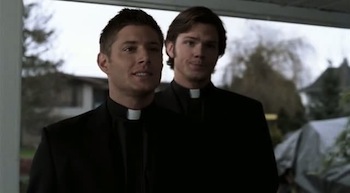 This has gotta be a whole new low for us.
Dean: I know what we need to do about your premonitions. I know where we have to go.
Sam: Where?
Dean: Vegas. [Sam 'harrumphs' and walks out] What? Come on, man! Craps table? We'd clean up!

Sam's visions lead him to another young man, Max Miller, with psychic abilities in Saginaw, Michigan

Sam has another premonition, this time of a man being murdered, but when they investigate the brothers learn that the death has been listed as a suicide. Then, after Sam has another vision, the man's brother dies. They eventually learn that the first victim's son, Max Miller, was responsible: after being abused by his family for years, Max discovered telekinetic abilities and used them to kill his father and uncle. Sam has a third vision of Max killing his stepmother, and in the process of stopping him, it's revealed that Max's real mother died in exactly the same way as Sam and Dean's. Max uses his telekinesis to lock Sam in a closet while he tries to kill Dean, but Sam escapes using previously-unknown telekinetic abilities of his own and stops Max, who takes his own life.

For this episode = 3 humans.