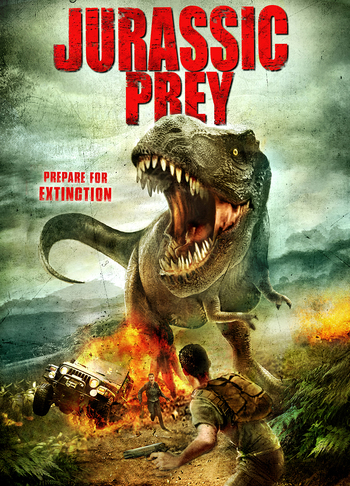 Jurassic Prey is a Dinosaur Movie by Mark Polonia.

Jackie (Danielle Donahue) is a mob boss' wife who steals his money to start a new life with her lover, Beach (Ken Van Sant). Andy (Jeff Kirkendall) is a Former Child Star from a show called "Crack Commandos" who, along with his old production friends Sparks (Robert Dennis) and Ed (James Carolus) rob a bank, and in doing so, attract the attention of the police. Lucky for them, Jackie happens to be in the parking lot of the bank they robbed, so they go with her to her cabin where they can all hang out.

What none of them know, however, is that blasting from a rock quarry in the area has awakened a dinosaur, which is now in the wild, and hungry.