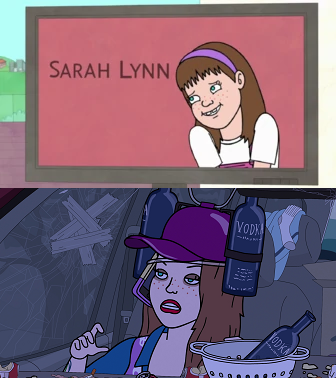 "I didn't know what I was signing up for. I was three."
"He's a former child star?! Oh, just lock him up and throw away the jail!"
— Bosco, Sam and Max: Culture Shock
Advertisement:

Probably one of Hollywood's biggest Acceptable Targets, the Former Child Star is a star of TV or film whose career was at its peak in their formative years. Alas, such an unorthodox childhood can leave its mark on anyone (especially if they were Not Allowed to Grow Up), and it always does in fictional depictions of the Former Child Star. In adulthood, they may be a struggling actor who finds it hard to be taken seriously when everyone remembers them as "that one kid from that one show," if they're remembered at all.

It doesn't help that puberty is a fickle beast and there is no guarantee that a cute and adorable kid will have Hollywood looks as an adult. Emma Watson and Daniel Radcliffe may have matured nicely since their Harry Potter days, but there are countless others whose adolescent years weren't nearly as kind, making it that much harder to find acting work as adults.

As for those who left showbiz, many wind up mourning their glory days in a dead-end job, caught up in Sex, Drugs and Rock & Roll, or (dis)gracing the covers of tabloids after a run-in with the law. Sadly, a case of Truth in Television, as the troubled biographies of some real-life Former Child Stars will show.

It should be noted that the worst examples of this trope in real life come from kids whose home lives were unstable to begin with: abusive, exploitative stage parents and/or a family history of addiction will make a child actor particularly vulnerable to the excesses of Hollywood. There are others who grew into relatively-normal adults, like Jodie Foster and Bill Mumy, because their parents took care to give them a stable upbringing under the circumstances.

No doubt Growing Up Sucks for them... especially if they're treated as though they never did.

A subtrope to No Celebrities Were Harmed. Compare White-Dwarf Starlet, an older version of this trope, as well as Hates the Job, Loves the Limelight. See also Horrible Hollywood. For other grown-up kids, see School Yard Bully All Grown Up and Kid Hero All Grown Up.

This trope applies not only to theatre and motion picture, but also to several sports, such as gymnastics, and arts, such as ballet, where the athletes rise to the top very young and the career is likely to be short.

Works as a Whole