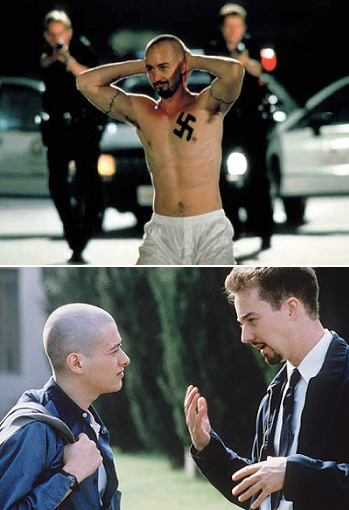 "I killed two guys, Danny, I killed them. And it didn't make me feel any different. It just got me more lost and I'm tired of being pissed off, Danny. I'm just tired of it."
In the name of the greatest people that have ever trod this earth, I draw the line in the dust and toss the gauntlet before the feet of tyranny, and I say segregation now, segregation tomorrow, segregation forever.
— George Wallace, 1963
Advertisement:
I was wrong. Those days are over, and they ought to be over.
— George Wallace, 1979

A character used to be a bigot (either to a specific group or every other group). Maybe he/she grew up in an environment where people have similar views. Maybe they were wronged by said group. Maybe they simply think their group is the best there is and look down on others. The bigot-target group may be Always Chaotic Evil.

But after some time, he/she stops holding such views. It may either happen in the past (i.e. as a backstory), or as a Character Development in the present.

Maybe the character witnesses the bigot-target group's good qualities (especially if the character was young and/or and Innocent Bigot). Maybe a member of said group helped them when they needed it, often despite what the bigoted person might do or say to their people. Maybe they realize that being a bigot harms them in the long run and they may need help from said group. They might also find out that said group is Not Always Evil.

Compare I Hate Past Me, The Atoner, Old Shame, and Reformed Bully. Contrast Schoolyard Bully All Grown Up. May result in a Zombie Advocate when they outright argue in favor of the group's humanity (if it's a group of a fantastic race.)