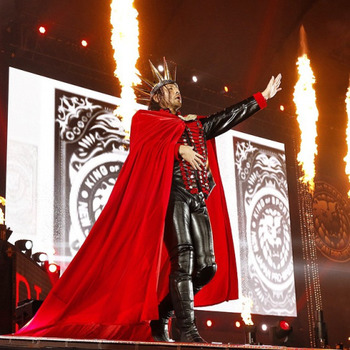 The King of Strong Style
"He loves Freddie Mercury, the former lead singer of Queen; for you kids that don't know, you can Google it. He's a Michael Jackson devotee. He's also called the King of Strong Style. Meaning he's a badass. How you can go from Freddie Mercury and Michael Jackson, to being a badass, is a unique journey, but this multi-talented unique personality gets it done."
—Jim Ross describing Shinsuke Nakamura during his entrance at Wrestle Kingdom 9.
Advertisement:

Shinsuke Nakamura (born February 24, 1980 in Mineyama, Kyoto) is a Japanese professional wrestler and mixed martial artist, one of the primary mainstays of New Japan Pro-Wrestling through the first 13 years of his career.

After training at the New Japan dojo, Nakamura's career began in NJPW in 2002, where he quickly established himself as a bright young prospect due to his strength, speed, and technique, earning the nickname of "Super Rookie". He was regarded so highly that just 15 months into his career, he became the youngest IWGP Heavyweight Champion in history

at just 23 years old, a feat only made more remarkable by the fact that he endured a short MMA career endorsed by Antonio Inoki at the same time, ending up with a 3-1-1 record. Though his title reign was ended by injury, the next two years saw him move on to his one IWGP Tag Team Championship

run with future Arch-Enemy Hiroshi Tanahashi, as well as two excursions to North America—the first with Tanahashi during said tag title reign, the second on his own for further development.

He came back from excursion number two as part of Masahiro Chono's Power Stable BLACK, specifically as the man Chono intended to make The Ace of the company. Chono ended up leaving the stable for a legends group, though, allowing Nakamura to reform it as RISE. Nakamura's rivalry with Tanahashi began to kick into high gear around this time, culminating in his victory over Tanahashi for his second turn as IWGP Heavyweight Champion. However, RISE would become splintered as several of the members later betrayed the team to join Togi Makabe's faction Great Bash Heel. The two groups proceeded to feud with each other, all the while slowly imploding simultaneously—a development which soon presented an opportunity to redirect both Nakamura's and New Japan's future direction.

During a match between Nakamura and Makabe, one of Makabe's closest allies in GBH, Toru Yano, betrayed Makabe to help Nakamura win. Shortly thereafter, Yano and Nakamura announced the disbandment of RISE and creation of the new faction CHAOS, consisting of nearly every member of GBH at the time not named Makabe or Tomoaki Honmanote the two of whom would carry on the GBH name as an occasional tag team. Shinsuke began to reinvent his persona into something akin to a Drunken Master without the actual drunkenness, as well as adopting a more violent wrestling style to go with it which made greater use of knee strikes and straight right hands, including his Boma Ye running knee finisher—a move which first gained infamy when it was used to take out Hiroshi Tanahashi and force him to vacate the world title.

Nakamura eventually faced Makabe for the vacated championship and won it for a third time. As champion, Nakamura declared his intent to resurrect strong style puroresu, which he considered a fallen art within New Japan, crowning himself with the nickname "The King of Strong Style". He lost the championship to Makabe after six months, and would make a series of unsuccessful title challenges since then, but continued to remain a mainstay in the company as well as obtain more gold following the creation of the IWGP Intercontinental Championship

He became the third IC champion in July of 2012; said title reign would last for a record 313 days, which to this day is still the longest run in the championship's history. He went on to hold the championship four more times over the years, each time taking it back directly from the man that ended his previous run, including in the second longest title run in history as well at 227 days. Needless to say, Nakamura is infamously synonymous with the IWGP Intercontinental title. CHAOS remains one of NJPW's top active stables to this day, and through the stable, Shinsuke has also became something of a mentor and close friend to another young superstar realizing his potential as a future face of Shinnihon: "The Rainmaker" Kazuchika Okada.

On January 6, 2016 Nakamura confirmed in an interview with Tokyo Sports that he would be leaving New Japan and sign with WWE; he subsequently vacated his Intercontinental title later that month. He made his WWE debut at NXT TakeOver: Dallas, defeating Sami Zayn. On August 20, Nakamura defeated Samoa Joe to win the NXT Championship. He would later lose the championship at Takeover: Toronto to Joe in a rematch, only to win it back 15 days later at a house show in Osaka, Japan. He joined WWE's main roster on the SmackDown following WrestleMania 33. He would then go to win his first Royal Rumble the following year.

Aside from New Japan, companies he has wrestled in periodically include CMLL, Ring of Honor, and Pro Wrestling NOAH. He was voted into the Wrestling Observer Hall of Fame in 2015.

Not to be confused with Japanese soccer player Shunsuke Nakamura.

"The King of Tropes, King Nakamura":