The Resurrection of Strong Style
CHAOS is a Professional Wrestling Power Stable that was founded in 2009 in New Japan Pro-Wrestling, and is one of the longest continuously running stables in New Japan's illustrious history, and functions as one of it's main "Units".
Advertisement:

CHAOS began life in the mid-2000's as Great Bash Heel under the guidance of Toru Yano, Tomoaki Honma, and Togi Makabe, who rankled against NJPW's style of wrestling at the time and gathered likeminded individuals such as Jadō & Gedō, and Tomohiro Ishii to help them carve out a place for themselves in the New Japan ring though brute force and brutal pack tactics. Meanwhile, a young Shinsuke Nakamura was building a force of his own of hungry, talented wrestlers called RISE, such as Hirooki Goto, Giant Bernard, Prince Devitt, and Low Ki to carve out a place among themselves. Naturally, both began clashing over the course of 2008 and well into 2009, where the matches were frequently bloody, and full of emotional, brutal conflicts between the various wrestlers. Much of Nakamura's force switched sides as a result of Makabe's cunning, and the young Nakamura never forgot nor forgave him for such treachery, and swore revenge on him.

And at Resolution '09, Nakamura got just that. Nakamura and Makabe had an all-out, no-holds barred brawl that no referee could possibly contain, that ended in dramatic fashion when Toru Yano suckered Makabe into giving him the chair he was going to use to put Nakamura out of commission, and turned on him, blasting him with a chair and powerbombing him for good measure before walking out with Nakamura. By the end of the month, Yano revealed that he had in fact recruited every single member of G.B.H.except Makabe and Honma, who continued G.B.H. as a tag team for a new, vicious stable centered around a revival of Strong style, and a deep seated need for vengeance against those who had wronged the "King of Strong Style". CHAOS was truly born. 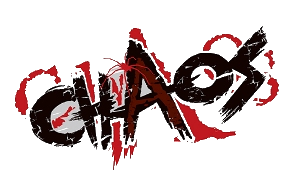 The original logo
Now having their foot in the door, and their wildly successful but increasingly eccentric leader set on dominating NJPW, CHAOS began expansion of their roster and their trophy cabinet rather quickly, bringing in West Coast independent veterans like Davey Richards and Rocky Romero to bolster the ranks in the tag division, and taking a chance on a pair of young talents like Yoshi-Hashi, and one Kazuchika Okada, who Gedo saw as a top priority to bring into CHAOS' ranks, and took to personally mentoring and managing him. His hunch paid off in a massive way, as Okada shocked the world by putting on a clinic against IWGP Heavyweight Champion
Advertisement:
Hiroshi Tanahashi, and winning his title in 2012. In the same year, Nakamura completed his quest for vengeance by beating Hirooki Goto for the IWGP Intercontinental championship, and held it for longer than any other wrestler in company history, but not before changing it's look to the current white strap design. By the end of 2013, CHAOS had a stranglehold on the entire company, with nearly every division dominated by a CHAOS member or tag team, nearly every belt present and accounted for, and tournaments being a lock into being CHAOS-front run. For the early 2010's, the Intercontinental and Heavyweight Championships were defined primarily by Nakamura and Okada, who were always in some form of feud with outside forces, but never each other always driving a one-upsmanship game between the two, and elevating the belts to new heights.

Yujiro Takahashi betrayed Okada in 2014, and defected to the newly reinvigorated Bullet Club, who would go on to take quite a few of CHAOS' entrenched positions in each division (including the IWGP Heavyweight Championship, taken from Okada by AJ Styles the night of Yujiro's betrayal). Yano, a founding member and one of its biggest wild cards, had entered a protracted feud with the sadistic veteran Minoru Suzuki, who lured away his tag team partner Takashi Iizuka to his own group: Suzuki-gun. Finally, Okada and Nakamura would have to meet in the G1 Climax finals to see who would again take on the Once in a Century talent known as Tanahashi, and had an absolutely spectacular finish, that ended with Okada coming away with the win, but coming up short at Wrestle Kingdom, leaving the arena in tears while Nakamura walked away triumphant in his IC title match. This rift between the two was furthered by Okada losing to Nakamura in the G1 Climax Tournament the following year, and Nakamura coming up similarly short against Tanahashi, which signaled the end of his time in NJPW. After surrendering the IC championship, Nakamura, Okada, and Ishii took on Tanahashi, Goto, and Ishii's NEVER Openweight Championship rival Katsuyori Shibata in an emotional finale at the end of January 2016, where Shinsuke finally entrusted the group to his long-time professional rival and closest ally, Kazuchika Okada.

The logo under Okada
CHAOS rebounded strong from Nakamura's departure, with each of its members finding individual success throughout in cementing their starpower throughout 2017, with Okada finally getting over the hump and beating Tanahashi, becoming one of the longest reigning IWGP heavyweight champions of all time. Rocky Romero also made a career tranisition after a storied time as part of a team with Trent Baretta, to manage and mentor the group's now premiere junior heavyweight tag team: Sho and Yoh, known now as Rpppongi 3k. Ishii further entrenched himself as its NEVER representative, having hard-hitting and intense match after hard-hitting intense match, while Yoshi-Hashi was spurred to get a sudden surprise win over Kenny Omega in the G1 Climax. But their most interesting get over the course of 2017 was that of Nakamura's former RISE stablemate and rival Hirooki Goto. Goto had picked up a bad reputation as a choke artist since his defeat at Shinsuke's hands, and was determined to shed the label by giving Okada's reign a spirited challenge. While he ultimately lost, Okada recognized his talent and gave him an invitation to the group. Joining CHAOS gave Goto the confidence he needed, and ultimately the will to become one of the longer running NEVER Openweight Champions on record. Okada also branched into foreign talent, finding a junior heavyweight standout in Will Ospreay from across the pond to properly represent the group in the Junior heavyweight singles division...and also finding a young New Zealander known as Jay White.

This presented a problem. Jay White had made it clear he was more motivated to be a champion than he was to be a team player, but the now full of himself Okada took no notice at the time. Then he got pinned twice at the July 9 Dominion pay per view in Osaka for the belt by none other than the Bullet Club's Kenny Omega after 720 days, which seemed to take him so far off his game his fellow CHAOS stablemates wondered if he'd gone crazy...and that's when White struck in the G1 Climax tournament, brawling with Okada and taking him out in the first round, announcing that CHAOS was now "his", and Okada would not be either champion or G1 Climax winner for the first time since 2012. Per his mid-career crisis, Okada amicably split with Gedo as his hype man...or so he thought, as shortly after the tournament Gedo revealed he'd joined up with the Switchblade, and later revealed they had both along with Jado had jumped ship to the Bullet Club. White took Okada's dismissive comments about him being a "Tokyo Dome-level opponent" very personally, and beat him up at every opportunity, until at long last Tanahashi came out to help his former rival, and aligned CHAOS with the New Japan Main Army, effectively making them both the biggest stable in the company, and by far the biggest threat to Bullet Club. The Dream Team of Tanahashi and Okada was short-lived, however, as neither were truly entirely on the same page, which after six consecutive losses at White's hands, forced Okada to finally break down his funk and take White seriously. He would eventually get his wins back, as well as slowly break CHAOS away from the main army once again. Okada also began listening to Rocky Romero for further ideas on who to bring into the fold, allowing Ospreay to appeal to Robbie Eagles' sense of honor and lure him to defect from Bullet Club as well as recruiting Mikey Nicholls.

In 2020, Okada and Ospreay faced off in the final day of G1 Climax group matches. Ospreay betrayed his mentor and faction leader and left the faction, making his own (The Empire) with his real life girlfriend Bea Priestly and the returning Great O'Khan.

Through NJPW's working relationship with All Elite Wrestling, Rocky Romero announced that he had re-invited both Trent Beretta and Chuck Taylor back into CHAOS after they had left NJPW at the beginning of 2019 to join AEW; the invitation was also extended to the rest of the Best Friends stable, which included Orange Cassidy, Kris Statlander (the unit's first female member) and Wheeler Yuta.

CHAOS as a group contains examples of: