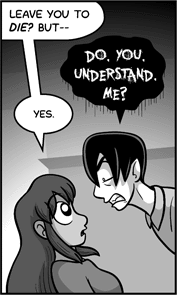 Messenger: This is blasphemy! This is madness!
Leonidas: Madness? …This! Is! SPARTA!
— 300
Advertisement:

LINES. DELIVERED. WITH. EXTREME! EMPHASIS! ON… EVERY! WORD! ESPECIALLY. THE. ENDING!!!!

This is dialogue transformed into spectacle. It is normally used in Chewing the Scenery and with accordance to the Rule of Cool, and is a favorite handwave for Acoustic License. A person who does this often will come across as a Large Ham or just someone with No Indoor Voice. Done badly, it can torpedo a dramatic scene. Done well, it can be part of a Moment of Awesome, although rarely the only component.

Often it's done with exclamation points to invoke the dramatic power of an emotional character, who's showing that you'd better take him seriously.

For a character who's cool, calm and unfazed (but no less professional and serious) it is done with periods, sometimes to show being serious, others to show whomever just used the exclamation points that they're not impressed.

Many times invokes the Rule of Three. If so, can overlap with Worst. Whatever. Ever!. Sometimes a part of a Skyward Scream or Spelling for Emphasis. If each word is accompanied with an attack then it's a Punctuated Pounding. If the delivery ends with a swear, then it's This Is for Emphasis, Bitch!.

A frequent variant, notably in Anime & Manga, is when a female character articulates the end of a sentence on a quiet, seductive tone to tease a male one (heart optional). Just. Like. This. ♡

Often leads to the line becoming memetic. An interesting experiment is to go on a Memetic Mutation page and see how many of the entries aren't due to Chewing the Scenery, Punctuated! For! Emphasis!, or hilarious Narm (often because of the other two).