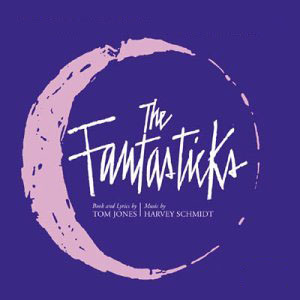 Try to remember the kind of September...
Advertisement:

The Fantasticks is an off-Broadway musical, loosely based off Les Romanesques, that first premiered May 3rd, 1960 and is currently the world's longest running musical production, originally running for 42 years. Its revival, in the Jerry Orbach Theatre (named for the original performer of El Gallo), began on August 23, 2006 and ended June 4, 2017. In the lobby, there was a count of how many shows it had in New York City — over 21,500.

It's a very popular choice for high schools and small theaters, with its cast of eight, minimal set and costumes, and longtime popularity. Furthermore, the casting frequently crosses the gender line: any roles except Matt, Luisa, and El Gallo can be played by either men or women.

The show begins with the narrator El Gallo (pronounced GUY-o) introducing the audience to the characters and the story. A girl named Luisa, who's a bit... out there and thinks she's a princess. She wears a necklace that belonged to her mother and considers it the most precious thing in the world to her. A boy named Matt, who is in love with Luisa and she loves him. The two are separated by a wall (who is actually played by a person) built by their fathers. They think they're Star-Crossed Lovers, but it's truly a plot by their fathers, who are actually very good friends, to have them fall in love. According to them, if you tell a kid no - they'll do it for sure!

During a secret meeting between Matt and Luisa, Luisa reveals she had a vision of a man coming to kidnap her and Matt fighting him off. Not long after, the fathers meet and discuss how to end their false feud. Matt's father proposes that they hire a professional to do the job. Enter El Gallo, who proceeds to explain all the various set-ups he can create for the kidnapping. After agreeing on a "first class" kidnapping, El Gallo sets off to find actors to help. Soon he finds Henry (an old Shakespearean actor) and Mortimer (who is really good at death scenes). Both are far past their prime, but he allows them to join anyhow.

Not long after, Matt and Luisa meet again in the forest. El Gallo and the actors appear to kidnap Luisa, but are easily "thwarted" by Matt. Thus the faux-feud ends and everyone lives Happily Ever After... Or do they?

As act two opens, everyone is beginning to realize that Happily Ever After isn't all it's cracked up to be. With the wall torn down, everyone is slowly getting on each other's nerves. A month later, Matt has run away to see the world, leaving Luisa behind and heartbroken, and the fathers have rebuilt the wall. Now El Gallo swoops in and Luisa pleads for him to take her to see the world. He promises he will, and tells her to pack, under the condition that she leave her beloved necklace with him as a promise she will return. As she leaves, Matt returns, bloodied and beaten, and fully aware the world isn't all adventure and fun as he hoped. El Gallo turns to leave with Luisa's necklace, but Matt makes an attempt to stop him. He merely brushes him off and disappears. Luisa comes back to find Matt and comforts him as it begins to snow and they begin to remember their feelings for each other once more.