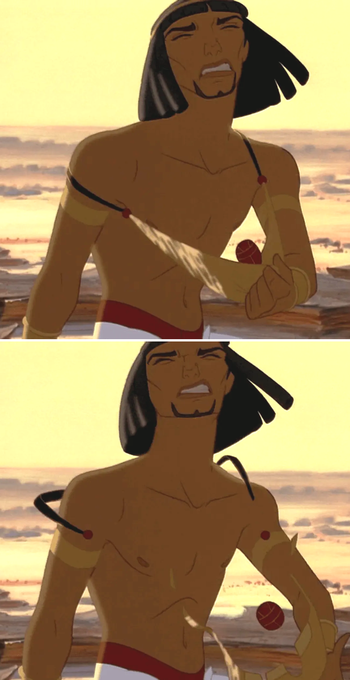 "Eww, like you're too good to work a clasp."
— Harmony, Buffy the Vampire Slayer
Advertisement:

A Plot Coupon often takes the form of a necklace or talisman worn around the neck, and any prominent locket, pendant or other item that is worn in this fashion will either be a piece of Applied Phlebotinum or just something with significant emotional baggage (or fodder for a later plot twist). Naturally, for such an item to be useful for the plot, it can't just stay there.

Thus there will inevitably come a time for said pendant to be removed. Maybe the wearer has decided It's All Junk. Maybe it's a power source that's been causing undesirable side-effects. Maybe the evil ring MacGuffin needs to be thrown into the volcano. Maybe a baddie wants its Phlebotinous powers for himself. Maybe it's the symbol of La Résistance and an official of The Empire is nosing around. Or perhaps it's a Power Limiter and it's time to stop limiting that power.

In any of these cases, because Reality Is Unrealistic, nobody will simply unclasp the thing and pocket it until later. Rather, the one doing the removing- be they friend, foe or even the wearer themself- will grab the pendant and rip it forcibly off of their neck. There's never any difficulty in this, whether the item is held by a string, a leather thong, or even a chain, nor does the wearer seem to suffer any injury. Then when the item is invariably seen again on someone's neck, nobody complains about having to tie the broken string back together, fix the chain, etc. Apparently all Applied Phlebotinum comes with magnetic breakaway clasps.

Of course, they do make clasps designed to release when yanked on, as a safety feature to prevent someone from getting clotheslined if the chain gets caught on something (or grabbed by someone). It's just not typically a standard feature on jewelry.

Note that this applies to other forms of jewelry or clothing that serve the same purpose. It may be a bracelet, earrings, a ring, or even some piece of clothing. Body jewelry doesn't count, as removing such generally does cause an injury to the wearer, even on TV. Handbags with long straps are especially good for this.

Super-Trope to Ripping Off the String of Pearls.

Overwhelmed by Friedrich's attentions, Daphne tears off the necklace he gave her.

Overwhelmed by Friedrich's attentions, Daphne tears off the necklace he gave her.