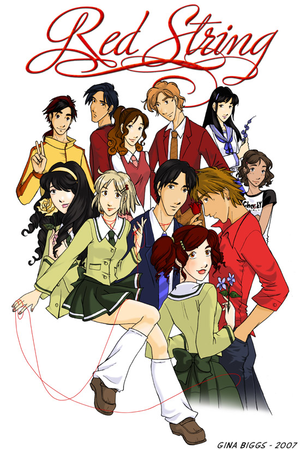 This isn't even half the main cast.
"The nail that sticks up must be hammered down."
— Japanese proverb
Advertisement:

For the Asian concept of soul mates, see Red String of Fate.

Red String is a Webcomic by Gina Biggs. It concerns the life of Japanese teenager Miharu Ogawa, a slightly kogal-ish teenage girl who comes home one day to find out she's engaged. A spirited girl, she rejects her parents planning her life out for her. While sitting on a park bench, she finds a sympathetic ear in senior Kazuo Fujiwara, a serious but pessimistic and weak-willed man who is taken by Miharu's strength and boldness. After they share a day together on a "pretend date," Miharu realizes that she has fallen in love with him... and that he is her affianced. She chooses to stay with him, but grapples with a very harsh reality about their relationship. She also struggles with genuinely loving someone while fighting against being Strangled by the Red String.

Along for the ride is a gigantic cast of supporting characters including friends, family, and schoolmates, many of whom have their own complicated relationships and love-lives. The series shows the struggle against the traditionalist Japanese culture, Miharu fights to retain her independent spirit while succeeding in a society that frowns upon change and individuality.

It was created as a entry in TokyoPop's Rising Stars Of Manga contest. When it didn't make it, Biggs posted it online and continued the story. It developed far beyond the basic concept, running from 2003 to its conclusion in August 2013. The series was picked up for publishing by Dark Horse Comics, who published the first 3 volumes. Vol. 4 and beyond are published by Biggs' own Strawberry Comics.

In June 2014, Biggs announced she would be releasing a new version of the final chapter as a "director's cut" of the ending to expand on criticisms of its resolution and clean up loose ends. In addition, the previously announced "bonus epilogues" will also be running on the site instead of only in the as yet unreleased final collection. This new content began release in July of 2014 on a dedicated tumblr.

After a site crash in 2017, the comic and its entire archive went offline. Eventually in 2019 the official website came back but only to advertise the published omnibus collections. You can see those here

. Biggs announced she would not be restoring the Red String archive so at this point the only way to read the comic is to buy the books.

See also Demon Aid, the author's subsequent project, as well as Love Not Found, which saw her return to romance comics but in an SF setting instead of modern day earth.