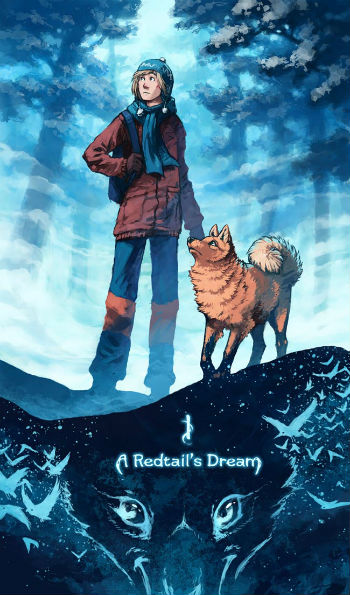 Hannu and Ville
"The northern lights pretty much take care of themselves, Puppy will be perfectly fine. And I'm sure he appreciates being given such an important task, so he'll be careful. He couldn't possibly cause any disturbances."
— Fox Spirit Prologue, Page 5
Advertisement:

is a webcomic by Minna Sundberg. It is a tale steeped in Finnish lore, revolving around the tribulations of a human boy named Hannu and his dog, Ville, as they embark on a reluctant journey through the realm of dreams to correct a cosmic mishap on the part of the young spirit, Puppy Fox.

Left with the task of managing the northern lights while his relatives have a private meeting, Puppy Fox finds himself in a world of trouble when he accidentally transports a mortal village into the spirit world. Before he can send the village back, the human souls are caught by the spirits of the Bird Path and snatched away to the realms of sleep. Desperate to fix the situation before his family finds out about it and grounds him, Puppy enlists the aid of a pair of mortals who happened not to be in the village at the time of the accident, and were therefore missed by the birds. The story follows the two, Hannu and Ville, as they try to retrieve all of the villagers before Puppy's desperation peaks and he sends all of them to the afterlife to hide the evidence of his blunder.

The 556-page comic ran for two years, updating every day except Sundays from September 2011 through October 2013.