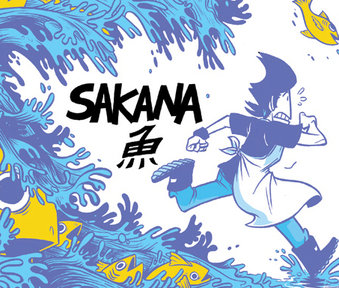 "Courting the girl of your dreams is hard when you work at the Tsukiji Fish Market in Tokyo, Japan. It's even harder if you are scared of girls, and near-impossible if your brother's kind of shady, your best friend is too excited, and your co-worker hates your guts."
— Sakana, Vol. 1 Summary
Advertisement:

Sakana is a Slice of Life with a side of Romantic Comedy written and drawn by Madeline "Mad" Rupert. The comic initially stars none other than Jiro Sakana, an especially nervous young man who works as a cashier at Sakana's fish stall alongside his older brother Taro, who's taken up the much more suitable occupation of the stall's butcher.

The plot revolves around the various and usually comedic misadventures of the stall's employees, starting off with Jiro finally managing to get a date with his crush - a woman simply known as "Cash Register Girl" thanks to Jiro being too jittery to actually get her name. Luckily(?), our hero has the help of the only slightly overprotective Taro and their easily excitable and extroverted roommate Taisei. A fourth party is added to the mix when Yuudai, the stall's short-tempered and uptight supervisor who harbors a special brand of hatred for Jiro, finds himself tangled up in the trio's antics.

From there, more and more mayhem, both comedic and otherwise, is piled onto the cast, and while it eventually serves to be the glue that holds them together, they must find a way to make it through in their own clumsy way. Whether or not they'll make it through in one piece, however, is another question.

An affiliate of Hiveworks

. Previously available on Smack Jeeves and the now defunct Inkblazers/Mangamagazine.