Film / The Lord of the Rings: The Return of the King 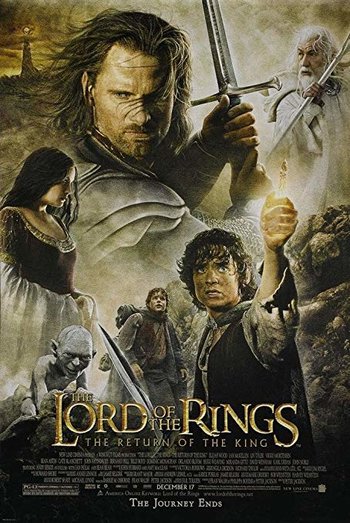 The Lord of the Rings: The Return of the King is a 2003 High Fantasy film and the third and last chapter of the Lord of the Rings film series adapting the novel saga of J. R. R. Tolkien, following The Fellowship of the Ring and The Two Towers. It was directed by Peter Jackson and released in December 2003.

Frodo Baggins and Sam Gamgee are finally reaching the end of their perilous journey and enter the dreaded lands of Mordor to destroy the One Ring in Mount Doom, and destroy Sauron once and for all with it. Meanwhile, following their great victory against Saruman, the other remaining heroes of the former Fellowship of the Ring and the cavalry of the kingdom of Rohan do everything in their power to help defend Minas Tirith, the citadel and capital city of the human kingdom of Gondor, against Sauron's humongous forces in a battle for the fate of the entire Middle-earth. And all throughout the battles Aragorn proves himself worthy of claiming the crown of Gondor.

Making the situation worse for the heroes of Middle-earth are the lunacy, despair, apathy, and sheer cowardice of the Steward of Gondor Denethor (the father of Boromir and Faramir) who's sitting on the throne in Minas Tirith, as well as Gollum's resurfacing treacherous side, and a giant spider.

The film cleaned house at the Academy Awards, winning eleven Oscars including Best Picture, tying the record with 1959's Ben-Hur and 1997's Titanic. Such victory was felt more as a crowning for the entire trilogy rather than just for the movie itself.

Peter Jackson would return 9 years later to helm a prequel trilogy, The Hobbit.

The Return of the King provides examples of:

Example of:
No Man of Woman Born