Film / Mac and Me 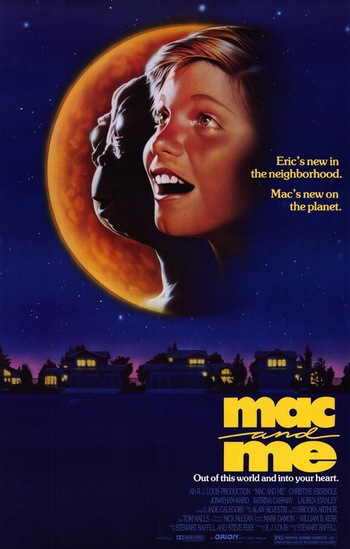 "You know, sometimes I feel kind of squished, like that 'And' between 'Mac and Me.'"
"E.T., call lawyer."
—Richard Harrington, The Washington Post review
Advertisement:

A 1988 Merchandise-Driven knockoff of E.T. the Extra-Terrestrial, commonly regarded as one of the worst Hollywood movies ever made.

Shortly after being picked up by an unmanned space probe and taken to Earth, a family of humanoid space aliens escapes from a research lab. They get split up, with the youngest entering a van belonging to the Cruise family: single mom Janet (Christine Ebersole), 16-year-old Michael (Jonathan Ward), and 11-year-old and wheelchair-bound Eric (Jade Calegory), who are moving from Illinois to California. Of course, it's the youngest kid who discovers the alien first—Hilarity Ensues as the creature's attempts to reunite with his family cause Eric's family to think he's going insane.

This is to E.T. what Hobgoblins is to Gremlins. Interestingly, Mac and Me was Jennifer Aniston's screen debut—maybe.note She was an extra in one scene, that possibly ended up as a Deleted Scene.

A clumsy scene in which Eric rolls off a cliff became a Running Gag on Late Night with Conan O'Brien, and later Conan: Whenever Paul Rudd is a guest, Rudd will play that clip instead of one from whatever film he's promoting at the time. Mystery Science Theater 3000 tackled this one at the top of Season 12 — coincidentally, both show and subject turned 30 years old that year. For the Mystery Science Theater 3000 episode recap, go here.

"Hey, look at all the tropes. This looks pretty nice!"