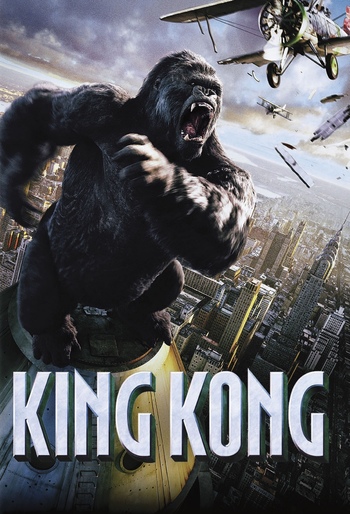 "And lo, the beast looked upon the face of beauty, and beauty stayed his hand. And from that day forward, he was as one dead." - Old Arabian Proverb
Advertisement:

Jackson's film diverges from the original by providing more of Denham's and Ann's respective back stories. Further, Driscoll is changed from the ship's first mate to a playwright, and a narcissistic Hollywood actor (Kyle Chandler) is added for comic relief. The natives are much more brutal than past portrayals. And, as with the 1976 film, a good deal of attention is paid to the unusual "romance" between the girl and the primate, which is strong enough that Ann would rather stay on the island with him than see him captured; and later she refuses to participate in his exhibition in the United States. She does, though, show up in time to halt his rampage through the city, and from there... well, you know how this one ends.

Interestingly, this version makes a show of Denham filming scenes and dialog lifted from the original 1933 movie.

Two licensed games based on the film were released in the same year; Peter Jackson's King Kong: The Official Game of the Movie and Kong: The 8th Wonder of the World. The former is considered by many to be a rare modern example of a good movie tie-in game, with props going to the atmosphere, environments and Kong gameplay. There's also the tie-in book The World of Kong: a Natural History of Skull Island, which delves into Skull Island's wildlife and features many creatures that don't appear in the film.

Tropes in Jackson's King Kong include:

The screams of the actress playing Ann suddenly turn real.

The screams of the actress playing Ann suddenly turn real.