Attack of the Monster Appendage 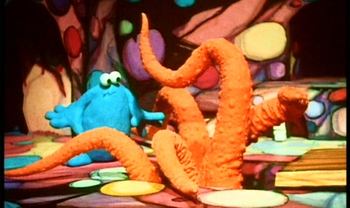 The characters of a story are confronted by a large tentacle or appendage of an unseen, bigger monster who's threatening them or binding them where they stand. However, whether for deliberate suspense or lack of budget, the tentacled monster will never appear, even if the heroes manages to hack off/harm the tentacle.

This is usually played, as said above, for suspense and possibly horror. Of course it's not strictly limited to tentacled monsters: It can be played with a gigantic arm or leg belonging to an unseen beast, but usually Stock Ness Monster types are quite popular. Sometimes it even looks like the tentacle is the actual monster. In case of giant Man-Eating Plant the plant itself may act as a tentacle of sort.

This can occur in two different forms: