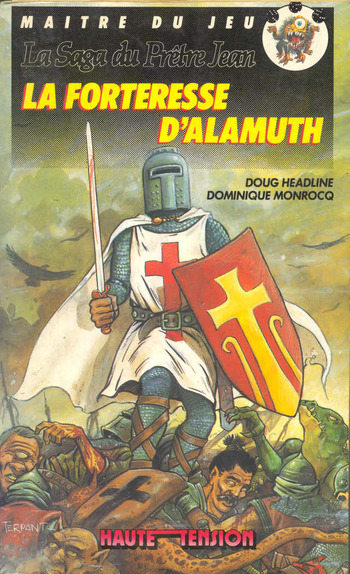 La Saga du Prêtre Jean (The Prester John's Saga) is a series of French Gamebooks, not dissimilar from other series like Fighting Fantasy or GrailQuest. It was written by Doug Headline, with the collaboration of Dominique Monrocq, Michel Pagel and Jacques Collin.

The books features a protagonist, the legendary Prester John himself, here depicted as a crusader under Richard the Lion-Hearted. During his sojourn in Acre, John learns from a crumbling papyrus of a legendary city somewhere in the far East, a city where Death, Plague and Unhappiness are unknown: the City of Eternal Youth, Shangri-La. Thrilled at the prospect, the crusader prepares himself for a dangerous journey that will take him all over the ancient world across time itself, all the way to the mythical city.

The series is composed of the five following books:

The series was supposed to continue in three more books set in China, Mongolia and finally Tibet, but because of the progressive decline of Gamebooks as whole in France, these books never saw the light. This did not stop a group of zealous and affectionate Italian fans from writing the three, unofficial books that ends the saga, keeping the original titles announced by the original series, namely:

Pretty much like Fighting Fantasy, Prester John has to roll for his Strength and Vitality scores, possess a rucksack which can hold ten items, some of which may prove useful, and can use spells from scrolls or items. Furthermore, there are a couple of special abilities: scoring a double six in combat kills the opponent instantly, while the opposite happens if the enemy rolls a double one. While the Vitality Stat is much higher than usual (2 dices + 18) the damage inflicted in combat is equal to the difference between your Strength Roll and your enemy's, allowing you to deal or receive more damage. Furthermore, being a man of faith, Prester John can, once per adventure, convert a single humanoid and sentient enemy to his cause, skipping a combat, and from Book 2 onward he can use the power of the deadly Eye of Horus to vanquish certain enemies.

The narration is mostly serious, though there are a couple of funny, tongue-in-cheek moments along the way, not to mention several references to mythology, folk tales and even Lovecraftian mythos.

The Unofficial sequel provides examples of: