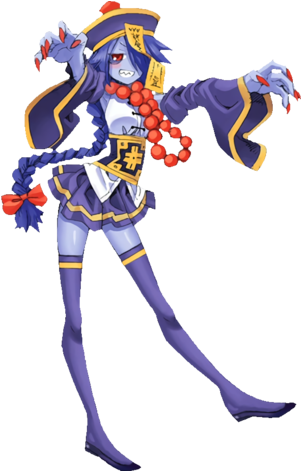 These ones are particularly bouncy...
"Stop shooting! I'm not a zombie! I'm a jiang shi! I don't even eat people OR their brains!"
— Hsien-Ko's win quote to Chris Redfield in Marvel vs. Capcom 3
Advertisement:

The monster called a 'Chinese Vampire' (Simplified: 僵尸; Traditional: 殭屍; Pinyin: Jiāng Shī) has also been translated as a hopping corpse or hopping vampire, among other names. The Mandarin name is romanized as jiangshi, usually. Despite the name, they are much closer in nature to the Western concepts of ghouls or zombies than to any common depiction of vampires.

As the Chinese are proud to claim, the concept of this monster developed independently of Slavic vampires — though there are similarities, such that "Vampire" has often made it into the translated name. A typical Chinese Vampire drains life energy, like the Slavic vamps of old, though more and more jiangshi are draining blood while they're at it due to cross-cultural influence. Behaviour-wise, however, the Chinese Vampire is much more bestial in its monstrosity than its Slavic counterpart; it cannot speak, has pale skin, long claw-like fingernails, and a long prehensile tongue. In what would probably be a particularly huge display of the Uncanny Valley, it moves by hopping and always has its arms outstretched in rigor mortis. Often a bit on the decayed side, they typically wear shabby robes of the kind worn by the nobility in times gone by — nowadays, Qing Dynasty-style robes are the thing. The modern visual depiction of the Jiangshi as a horrific Qing official may have been derived by the anti-Manchu or anti-Qing sentiments of the Han Chinese population during the Qing Dynasty, as the officials were viewed as bloodthirsty creatures with little regard for humanity. Interestingly, a literal translation of jiangshi is "Stiff Corpse"; being dead, of course, the body is stiff from rigor mortis and has to hop as the subtle motions of walking are beyond it.

In some versions, it detects potential victims by the energy fluctuations caused by their breathing — one can hide, for a while, from one by holding one's breath. Some of these stories purport that if one manages to suck the creature's dying (and still held) breath out of it, it will fall inanimate and become an ordinary corpse. Folklore may also suggest escaping it by strewing many small objects, such as rice, in its path, which it would feel compelled to count (much like another vampire, more familiar to western audiences, although this is a common weakness among Slavic vampires in general as well). It may be controlled with a parchment inscribed with runes placed on its head.

Like Slavic vampires and Anglo zombies, a person drained of Life Energy will become another of its kind — minus the robes, of course, unless they were actually wearing them at the time.

Typical weaknesses of a jiangshi include the blood of a black dog, a wooden sword made from a peach tree, a hen's egg, glutinous rice (by extension of its use in the attempt to draw poisons from a living body), and the urine of a virgin boy. In case you were wondering, the classic Kill It with Fire is implied by the text of Zi Bu Yu

to work as well. It's been suggested due to the jiangshi's lack of advanced motor function, one could pull off Flipping Helpless on it if it was knocked onto its back.

The myth is an out-growth of an earlier legend to the effect that a person who died far from home could be brought back home for burial, which was greatly preferable, by a Daoist magician or priest's affixing a parchment with an effective prescription to its forehead and leading it home, often with the accompaniment of a drum to tell it when to hop. Some expanded this into entire of squads of hopping corpses led across the countryside, it being cheaper that way... though more prone to one's getting lost, or undetectedly exceeding the limits of its animating spell and going rogue.

Sub-Trope of Our Vampires Are Different. Compare Classical Movie Vampire and Our Zombies Are Different, Looks Like Orlok. Not to Be Confused with a western-style vampire who is ethnically Chinese.

Incidentally, in Chinese, the word Jiāng Shī is also applied to the Anglo zombies (alongside 丧尸/喪屍 Sàng Shī which exclusively means zombies), while Slavic vampires use another term entirely 吸血鬼 (Xī Xuè Guǐ, literally Blood-Sucking Ghost). A Chinese man would find jiangshi to be closer to zombies than vampires.

Not to be confused with the actual Chinese poet Jiang Shi.

Easily the most famous of all Chinese Vampires, twin girls from a Chinese village used a forbidden ritual to turn into undead to save their mother's soul.

Easily the most famous of all Chinese Vampires, twin girls from a Chinese village used a forbidden ritual to turn into undead to save their mother's soul.