Film / The Legend of the 7 Golden Vampires 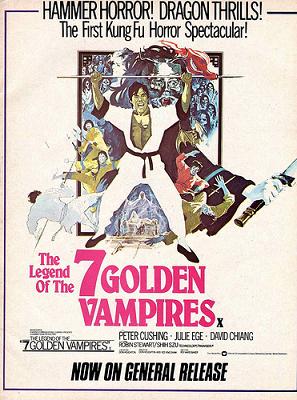 In 1804, a man named Kah awakens Dracula from his slumber and asks him to help bring his masters, the Seven Golden Vampires, back to power. Dracula instead decides to take the whole operation over and sets out for China.

A hundred years later, Professor Van Helsing (Peter Cushing) is lecturing in China, but is about to leave as his vampire theories have been met with disbelief. He then meets Hsi Ching (David Chiang), who tells him that his home village is under the Golden Vampires' terror, and asks his help. Van Helsing agrees and sets out with Hsi Ching's brothers and sister to the village.

This movie was the stake through Hammer's heart; they made no more Dracula movies after this.

The Shaws would collaborate with Hammer studios again in the same year, in the spy-espionage thriller Shatter.

Examples in this movie: