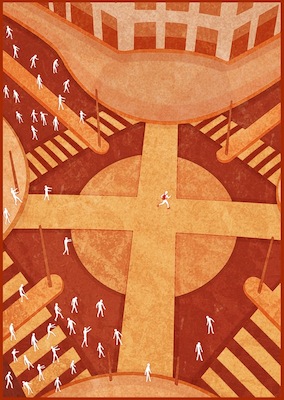 Yeah, under the circumstances, I'd advise running.
Sam Yao: You've come down in a nest of hostiles. They've heard the noise. There are ... thirty. No, forty. No... crap. Your only safe path is toward the tower, you should be able to see that from where you are. If there's anyone alive there, just run. Run!
Advertisement:

Zombies, Run! is a 2012 iOS, Android and WP7 app that falls somewhere between a game, a fitness app, and a Radio Drama. It also has zombies.

The game is set around Abel Township, a small settlement that's sprung up around an old farmhouse. A few motley survivors have banded together, but the secret to the town's success are the Runners; the people whose job it is to head out into the wilderness and track down supplies, leads, and at least sometimes just draw the zombies' attention away from the town. You are Runner 5. (Though you're not the first Runner 5.) You were going to be dropping government supplies to the town, but when your helicopter was shot down by a rocket launcher, you found yourself stranded. And if running's all you can do, then you might as well do it. A lot.

But that rocket launcher... who had a rocket launcher in the area? And why would they shoot down a supply chopper? Also curious: Why were you notably understocked, carrying only half the supplies you were meant to? And what is Project Greenshoot?

The actual gameplay is fairly minimal; as you run, a radio play will begin sounding in your ears, interspersed with music from your playlists. This radio play tells the story of the town and draws you into the twists and mysteries of the setting. However, as you run you'll also pick up supplies that can be used to build up the township, developing key locations such as a hospital and radio tower. Doing this in turn unlocks more missions. At other times, the game throws zombie hordes at you, and you'll need to speed up 20% in order to evade them, or drop key supplies to distract the zombies and get away.

In addition to genuinely being a fun and entertaining motivational tool for exercise, the game has the distinction of being an early success story in using crowd-funding to create a video game. The game was floated on Kickstarter and raised $72,627

. At the time, this was considered quite remarkable.

Since then, the game has received a set of downloadable add-on "Race" missions that deliver story based on distance rather than time, and which also tell the story from the point of view of an antagonist group. It's also received a Spin-Off app called 5K Trainer, which is exactly that: A beginner's program that helps new runners to reach the point where they can run the standard 5K runs Zombies, Run! is based around. The COVID-19 Pandemic also saw the release of The Home Front, missions that guide players through their exercising at home. There are also New Adventures, a mixture of 5K/10K races and miniseries that has nothing to do with zombies or the world of Abel Township.

The game is currently on its ninth season.