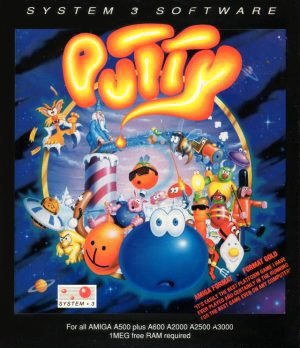 Putty is a series of video games developed by UK company System 3. They focus on the titular character Putty and his adventures.

An evil wizard named Dazzledale and his pet cat Dweezil have stolen all of the Putty people and plans to turn them into bubblegum. Putty has been banished to the planet Zid, where he befriends a colony of robots who plan to build a skyscraper high enough to get Putty back home. However, Dazzledale's minions have also taken over this planet and freeze the robots in an attempt to foil their plan. Now, Putty must defeat Dazzledale and save all the robots so work on the skyscraper can continue.

Originally released on the Amiga and later ported to the SNES as Super Putty. A sequel called Putty Squad was released for the SNES in 1994; the Amiga version was finished the same year but not released until 2013.

This series contains examples of;