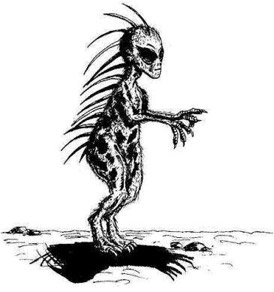 Aliens will breed with anything.
"Chupacabra. They're all over Mexico."
— Brock Samson, The Venture Bros.
Advertisement:

An Urban Myth monster of Latin American origin, believed to suck the blood of livestock animals, especially goats (thus the name, which is Spanish for "Goatsucker"). Combines old Vampire Tropes with modern UFO mythology, by way of Our Cryptids Are More Mysterious.

The "myth" began in Puerto Rico during the 1970s, making this monster much more recent than many would expect. At the time, there was a rash of animal slayings, mostly farm animals that had bled to death. This caused some people to (halfway seriously) think some kind of vampiric creature was on the loose; it became known as "The Moca Vampire" (Moca being the town were the attacks started). The attacks eventually stopped as mysteriously as they had begun. The local yellow journals, of course, exploited them to the hilt. It's worth noting much of the hype was tongue-in-cheek for otherwise sleepy, slow news weeks.

Coincidentally, at the same time, similar unexplained cattle slayings were taking place in the southwestern United States. In their case, they gave rise to the urban legend of aliens stealing cattle for experimentation.

In the 1990s, the attacks started happening again on Puerto Rico. This time, people started calling the "monster" El Chupacabras, later shortened to just Chupacabra. Supposedly, Silverio Perez of the comedy group Los Rayos Gamma coined the name to give you an idea of how seriously this was taken. A magazine called "Revista OVNI" (UFO Magazine) came up with the theory that the creature could have been created by aliens, likely inspired by the American cattle slayings theory. They also provided an artist's conception of what it looked like — showing a creature resembling a skinny, big eyed "Grey" type alien but with fangs, claws, scaly skin and a ridge of spines along the back. This was supposedly based on the description from a female witness who claimed to have seen the monster, however said witness was apparently under the impression the events of the movie Species were happening in reality. Looking at the description she gave and the film's monster called Sil, similarities are evident. Despite having no actual evidence for any of this, people embraced it, and the current concept of the Chupacabra was born. The slayings were never officially resolved, multiple local veterinarians, the Puerto Rican FBI investigators reviewing the cases, and an American expert on animal attacks all identified them as being caused by wild dogs, based on both pictures of the attack scenes and autopsy on the victims. The idea the monster drained its victims of blood that which was often reported in news print and radio, was itself a misconception of what happens to animal corpses after death. Blood solidifies, coagulating very quickly when it stops being actively pumped through the veins, and a combination of this and the blood draining out of puncture wounds lead to bodies quickly appearing "bloodless" after a few hours. All of the autopsies on supposed Chupacabra attack victims routinely found coagulated blood inside the bodies of victims, completely typical of dog and other mundane predator attack.

The myth became surprisingly popular across Central and South America over the years, and even in the Southern United States, with people claiming to have actually seen the creature. The myth was further bolstered by the Mexican powers that be from 1994 to 1996

, who intentionally played it up on local news and media specifically because every second spent discussing El Chupacabras was a second not spent discussing the major political and economic turmoil that was happening back then. Interestingly, it changed its appearance on its travels: in Latin countries, it's reported as being a bizarre red-eyed alien being with spines along its back, like the page image. In the US, they tend to take on the appearance of hairless dogs. It also has been featured on several TV shows and movies, effectively being treated as the Latin American equivalent of Bigfoot. Pop culture spread the chupacabra even further, with recent sightings as far as Russia.

The Chupacabra is sometimes known as the Chupacabras. This is in fact the original form of the name in Spanish; this type of compound word in Spanish (verb + noun) usually has the plural form of the noun (other examples: el abrelatas "the can opener", el sacapuntas "the pencil sharpener", el tocadiscos "the record player", el pisapapeles "the paperweight"). In 2010, corpses of quadrupedal "Chupacabra" were analyzed and revealed to be coyotes afflicted with mange, while the bipedal Chupacabra originated from Madelyne Tolentino, the eyewitness from the Puerto Rico cases, believing that the monster Sil from the science fiction horror film Species, which she had watched prior to making the report, was real.

Some examples of series that have made references to the Chupacabra: